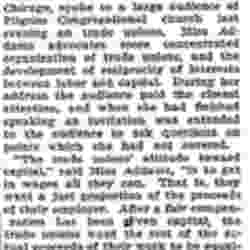 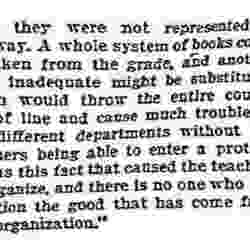 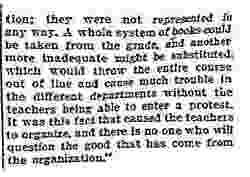 SPEAKS IN FAVOR OF TRADE UNIONS

RECIPROCITY BETWEEN CAPITAL AND LABOR NEEDED.

Organization of Teachers in Chicago Has Resulted in a Great Deal of Good.

Miss Jane Addams, of Hull House, Chicago, spoke to a large audience at Pilgrim Congregational Church last evening on trade unions. Miss Addams advocates more concentrated organization of trade unions, and the development of reciprocity of interests between labor and capital. During her address the audience paid the closest attention, and when she had finished speaking an invitation was extended to the audience to ask questions on points which she had not covered.

"The trade unions' attitude toward capital," said Miss Addams, "is to get in wages all they can. That is, they want a just proportion of the proceeds of their employer. After a fair compensation has been given capital, the trade unions want the rest of the actual proceeds of their work to be equally divided among the employees. A fair share is what they demand."

The speaker was inclined to advance the idea of a gigantic trust between the trade unions and capital, which combined could discriminate against the consumer, rather than have the manufacturing or other establishment close down, thereby throwing labor out of employment.

"A combination of mutual interests," said Miss Addams, "is what is needed more than any other one thing." The speaker talked of the trade unions which are being organized among teachers in Chicago, and said that the organization of the teachers was developed more through a desire to be represented in educational affairs than from any other reason.

"It did not spring," said Miss Addams, "from dissatisfaction over salaries, although this factor did enter into the whole consideration. There was formerly no method by which grade teachers could make themselves heard before the board of education; there was no method by which they could percolate through the principals and get their interests and those of their departments before the board of education; [page 2] they were not represented in any way. A whole system of books could be taken from the grade, and another more inadequate might be substituted, which would throw the entire course out of line and cause much trouble in the different departments without the teachers being able to enter a protest. It was this fact that caused the teachers to organize, and there is no one who will question the good that has come from the organization."

Addams discusses means of closing the divide between capitalist and trade unions.