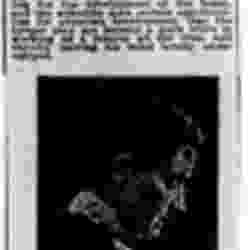 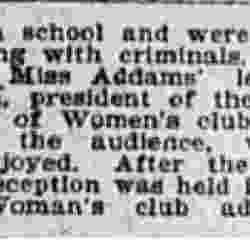 Pays a Tribute to [Tolstoy] and Dwells on Great Works for the People.

Regards the Distinguished Man as One of the Leading Exponents of Peace.

To an audience that overflowed the seating capacity of the First Congregational Church Monday night, necessitating the placing of an additional number of chairs, Miss Jane Addams of Hull House, Chicago, gave a lecture on "The New Ideals of Peace."

In her usual felicitous manner Miss Addams spoke on her theme with a breadth and understanding, interspersing her remarks with well-told anecdotes that held the interest of her entire audience. In an introductory manner Miss Addams spoke of the first exposition held in London in 1851 with a view of bringing the great nations together and thus facilitating the peace movement throughout the world, and remarked that since that time there had been twelve great wars which had marred the world's progress. Leading up to the chief exponent of the subject on which she spoke, she gave an interesting outline of [Tolstoy's] early career, with the simultaneous phases of development and advancement through which he passed. Speaking of a recent visit to [Tolstoy], she asked why it was that, although people found it impossible to agree with [Tolstoy] in all his beliefs, yet they [believed] him to be the most attractive figure today, and at the same time the one figure that for sincerity of purpose -- though not consistency -- was the greatest active non-resistant force in favor of the abandonment of war.

Speaking of his ideas on the labor which man ought to perform in this world, she said that [Tolstoy] believed in dividing everything into systematic parts, allowing the laboring man certain opportunities for the development of the brain, and the scientific man certain opportunities for the [physical] development, that the former may not become a mere brute in working as a laborer all the time, and thereby leaving his mind totally undeveloped.

[Tolstoy], she added, had admitted that his first works were written with the sole view of pleasing the public and furnishing amusement, but that his last novels, with the exception of the "Resurrection," had been written for the laboring classes around him, and of a life they understood; this being his idea of what art should be for, although admitting that his last books had been pronounced failures.

Speaking of the laboring classes of Russia Miss Addams said that they looked upon labor as a duty, an honor and a privilege, the laboring man always being upheld in the villages of that country as the chief men of the village, reversing the proceedings of America. Sects of laboring people in that country were now being formed on a large scale to protest against their entering the army, not on account of their objection to war, but acting on the belief that their dignity of purpose and duty called them elsewhere in life, and that they were as a unit to work their destiny out, not in battle, but in labor.

Miss Addams spoke on the "Resurrection," and also gave a pretty little sketch of [Tolstoy's] home life, showing some of the inconsistencies of the life of this, the great exponent of peace, remarking on the fact of he having renounced his fortune, which he had willed to his wife.

She stated that [Tolstoy] had greatly discouraged the growth of a colony of people around his home, who wished to follow his lead, believing that every man should work out his own destiny in the sphere where he happened to be cast. Miss Addams also testified to the noble and self-sacrificing character of [Tolstoy], and paid a warm tribute to the great work which he had started in the nation that people liked to think barbaric for the final peace of the world. She spoke a little on the good resulting from the use of an officer attached to the Hull House in Chicago, for the watching of small boys who were too young to be sent to [page 2] the reform school and were thus saved from mixing with criminals.

Prior to Miss Addams' lecture Mrs. Dore Lyon, president of the New York Federation of Women's Clubs, sang two solos for the audience, which were greatly enjoyed. After the lecture an informal reception was held in the rooms of the Woman's club adjoining the church. 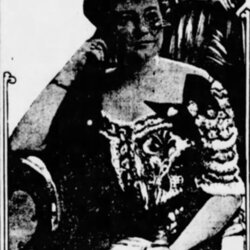 Addams discusses Tolstoy and his ideas on labor and peace.