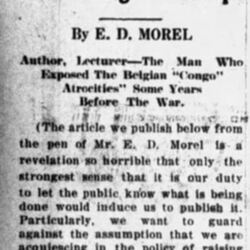 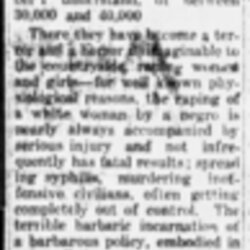 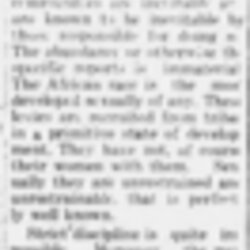 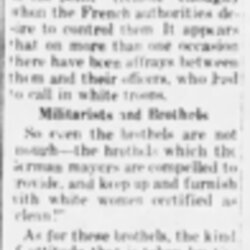 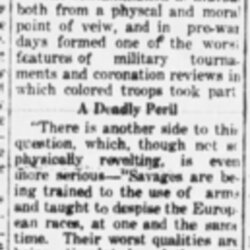 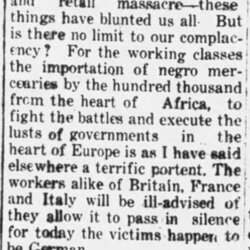 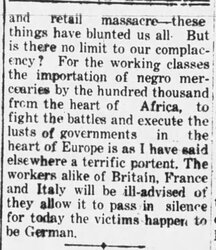 A Briton’s Protest Against The Black Scourge in Europe

Author, Lecturer -- The Man Who Exposed The Belgian “Congo Atrocities” Some Years Before The War.

(The article we publish below from the pen of Mr. E. D. Morel is a revelation so horrible that only the strongest sense that it is our duty to let the public know what is being done would induce us to publish it. Particularly, we want to guard against the assumption that we are acquiescing in the policy of raising hostility against the French people. The French people are innocent. Still more strictly would we guard against the idea that we are encouraging color prejudice. But for the very reason that we champion the rights of the African native in his own home, we deplore that he should [page 2] be used as a mere instrument of revenge by an imperialist Power).

“In addition to Frankfurt Darmstadt, Offenback, Harnau, Homburg and [Wiesbaden] have been occupied. The troops (20000) consisted entirely of Senegalese black men, only the officers being white.”

The French militarists are perpetrating an abominable outrage upon womanhood upon the white race, and upon civilization. Not content with using hundreds of primitive African barbarians in the war, who stuffed their haversacks with eyeballs, ears and heads of the foe, they are overrunning Europe with them today, 18 months after the war is over.

There they have become a terror and a horror unimaginable to the countryside, raping women and girls -- for well known physiological reasons, the raping of a white woman by a negro is nearly always accompanied by serious injury and not infrequently has fatal results; spreading syphilis, murdering inoffensive civilians, often getting completely out of control. The terrible barbaric incarnation of a barbarous policy, embodied in a so-called peace treaty which puts back the clock two thousand years.

One may read the following article in last week’s “Clarte” (Paris): --

“Apart from the barely restrainable bestiality of the black troops syphilis is making terrible ravages where they are stationed. Many dangerously contaminated prostitutes have been sent from France to Wiesbaden and Mayence (Mainz) The hospitals no longer suffice. Large buildings have been requisitioned for the patients (men and women). Many young German girls some of them not more than 14 or fifteen years old -- are admitted into these hospitals. The latter sell themselves because 20 francs are worth 150 marks, and 50 francs 400 marks.”

And this is only one side of the canvas. I have before me a number of depositions from relatives, victims, doctors, lawyers of cases of rape -- some of them of an atrocious character -- of parties of young girls returning [page 3] from labor in the fields waylaid and humble working women seized in the streets after dark reports of the continual and increasing disappearance of young girls from the towns and villages of the Sarr Valley of dead bodies of young women discovered under manure heaps and so on.

From Mainz, Ems, Wiesbader Ludwigshafen comes advice that the local town councils must provide maisons [tolérées] (in increasing numbers) for the use of these black troops to pay [for] their upkeep, and provide fuel to heat them.

At Saarbrucken, it seems, [the] cost to the town of these brothels is no less than 70,000 [marks.] It is reported to me that [the] mayor of a certain town (I [do] not here mention it for obvious reasons) was told that his hesitation in complying to demand for this purpose was rendering him liable to court-martial. I was impressed upon him that such houses were "specially necessary” for black troops, and if not provided German women, girls “and boys” would pay the penalty. All this is merely the fringe. As one correspondent puts it: --

“Some of the most awful things never become publicly known -- the assaults of negro soldiers on ladies who could [not] face publicity, and have committed suicide. Things are [such] that strangers would consider them pure inventions, whether told or printed.”

I should like to [emphasize?] some of the main issues [involved.] The results of installing [black] barbarians among [European] communities are inevitable [and] are known to be inevitable by those responsible for doing [so.] The abundance or otherwise the specific reports is immaterial. The African race is the most developed sexually of any. These levies are recruited from [tribes] in a primitive state of development. They have not, of course, their women with them. Sexually they are unrestrained and unrestrainable. That is perfectly well known.

Strict discipline is quite impossible. Moreover the men cannot be confined to barracks.

The economic poverty [in] which the Treaty plunges the working and middle classes in Germany is an incentive to [prostitution.] It is all part of a pre-determined policy. The men who are doing this know what they are doing and why they are doing it. What inextinguishable fires of hatred are being accumulated upon the head of the French people -- innocent -- as a people -- for these things -- the future will only too clearly show. As a distinguished soldier said to me the other day: “Were I a German, I would forgive everything, but this, never.”

Let me insist that this black outrage is part of a policy. The policy is laid down in the Peace Treaty -- naked and unashamed: To ruin, enslave, degrade, dismember, reduce to the lowest depths of despair and humiliation the whole people. We are parties to that policy against our better instincts against our obvious interests.

Upon a more ruthless France the dirtiest of the work involves. Her militarists enjoy it. But in the main policy in which this is the most striking symbol, we are partners. Our people tolerate it, partly because they do not understand, partly because they have been taught to believe that the rules alone of Germany were alone responsible for the hell let loose in the world -- which is a lie; but were it the truth, it would not justify the torture of the German people.

The French government is using for its invasion of Germany between 30,000 and 40,000 [page 4] black troops from its colonial possessions.

The British and French governments are at loggerheads because France moved upon Germany without consultation with the allies. But the greatest crime is the fact that host of black troops, with primitive sexual passions, are being employed in the occupation. On that issue the British government has so far remained silent. Here is a revolting but typical instance of what follows the keeping of black soldiers in Europe:

“A party of women and children returning from field work [in] the warm of X--- and walking towards Y--- were stopped by a party of three colored French soldiers. The men chose the three youngest women, carried them off on the pretext that they ‘had no papers’ and violated them.”

Evidence which has reached me shows that it is impossible to control the black levies, even [at] the point (remote enough) when the French authorities desire to control them. It appears that on more than one occasion there have been affrays between them and their officers, who had to call in white troops.

So even the brothels are not enough -- the brothels which the German mayors are compelled to provide, and keep up and furnish with white women certified as clean!

As for these brothels, the kind [of] attitude that is taken by the military authorities may be gauged by the following extract from a letter lately received from an occupied German town:

“The French have ordered two large houses in the busiest part of this town to be furnished as [maisons tolérées] for French troops and officers at the expense of the municipality. But this was not found sufficient for a third large house has been requisitioned opposite the barracks, and all the tenants had to clear out within twenty four hours. In spite of the great lack of coal the French demand more heating in the French brothels than that allowed to any other houses. All the wood which the municipality had accumulated for a time of need has been requisitioned by the French for this purpose.”

Everywhere indignation at this barbarous French policy is growing and the demand is now general for the return by the French of her colonial troops to their native Africa. [page 5]

Brigadier General C. B. Thomson, D.S.O., gives the weighty confirmation of a distinguished soldier, wide in experience, of the danger lurking in the scandal that I have repeatedly denounced.

“I share to the full your horror and disgust” he writes “at the employment of French black troops in Germany. Having had some experience of the West coast of Africa, I can confirm what you say as to the sexual proclivities of these men, to whom, in default of women of their own race, intercourse with European women is a necessity which has to be met.

“The contamination is mutual both from a physical and moral point of view, and in pre-war days formed one of the worst features of military tournaments and coronation reviews in which colored troops took part."

“There is another side to this question, which, though not so physically revolting, is even more serious -- Savages are being trained to the use of arms and taught to despise the European races, at one and the same time. Their worst qualities are being stimulated, and they will return to their native land restless, dissatisfied, ripe for any mischief, and the ready tools of those who wish to stir up strife.

“The publicity you are giving to these atrocious happenings in Germany will, it is to be hoped rouse an apathetic public to [sane] realization of the iniquities, and also of the total incapacity of the men who made those treaties to deal with modern problems either at home or abroad."

And then -- this. Five [years] of carnage, of the negation of [all] law, divine and human of poisonous preaching from 10,000 pulpits, of the deadly familiarity of casualty lists and [wholesale] [page 6] and retail massacre -- these things have blunted us all. But is there no limit to our complacency? For the working classes the importation of negro [mercenaries] by the hundred thousand from the heart of Africa, to fight the battles and execute the lusts of governments in the heart of Europe is as I have said elsewhere a terrific portent. The workers alike of Britain, France and Italy will be ill-advised [if] they allow it to pass in silence for today the victims happen to be German. 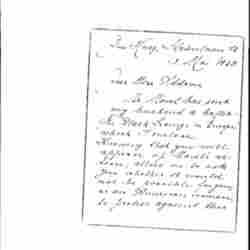 Morel claims that France is stationing black soldiers in Germany to rape and terrorize German women.

The article was published first in the London Daily Herald, April 10, 1920.