Address to the Social Workers' Club of Detroit, January 25, 1920 (excerpts) 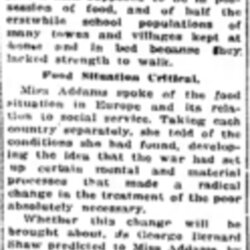 Jane Addams, of Hull House, Chicago, most famous of American settlement workers, Sunday afternoon, told the Social Workers’ Club, of Detroit, of the terrible conditions of child life in war-shocked Europe, in an address in the Jewish institute, East High Street.

She told of thousands of children become criminals through a lowering of moral character induced by years of under-nutrition; of mobs of girls and boys not yet in their teens become savage enough to attack and seriously injure a man supposed to be in possession of food, and of half the erstwhile school populations of many towns and villages kept at home and in bed because they lacked strength to walk.

Miss Addams spoke of the food situation in Europe and its relation to social service. Taking each country separately, she told of the conditions she had found, developing the idea that the war had set up certain mental and material processes that made a radical change in the treatment of the poor absolutely necessary.

Whether this change will be brought about, as George Bernard Shaw predicted to Miss Addams, by governments taking over many of the activities handled by social workers before the war or by an extension of social work by the old agencies, the speaker refused to predict.

“Housing has become perhaps the greatest problem abroad,” said Miss Addams. “No matter where you go or what you discuss in England, France or other countries in Europe, you are certain to come around to a discussion of the housing situation. It is estimated that there are now 1,000,000 families in England without homes -- that is, living on other people -- and this condition is aggravated by the fact that the English working class will no longer be satisfied with pre-war standards."

“The war made it necessary for the government to step in for its own protection and fix a standard of living and housing for these people, and the minimum once so fixed will be impossible to reduce.

“In Belgium and Northern France, the American relief organization fed 10,000,000 people, and fed them so scientifically that the pre-war death rate in these regions was materially reduced. These people are not going to be content to be less well cared for in the future.”­­ 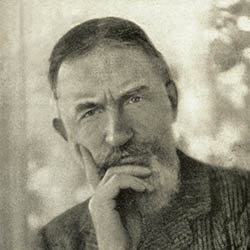 Addams describes the conditions in Europe after the war.