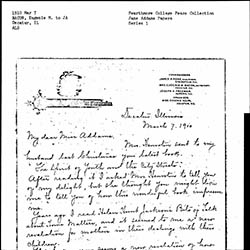 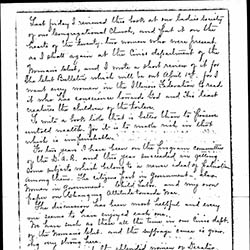 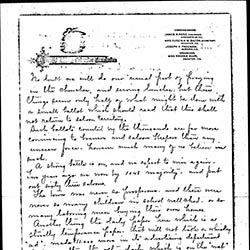 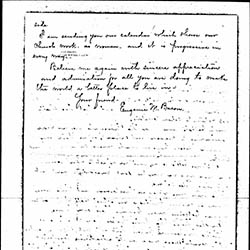 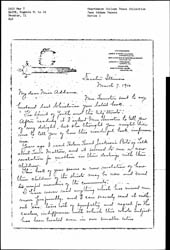 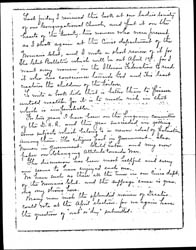 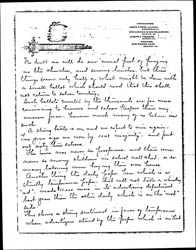 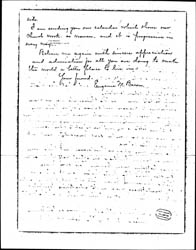 Mrs. Henrotin sent to my husband last Christmas your latest book, "The Spirit of Youth and the City Streets."

After reading it I asked Mrs. Henrotin to tell you of my delight, but she thought you might like me to tell you of how this wonderful book impresses me.

Years ago I read Helen Hunt Jackson's Bits of Talk about Home Matters, and it seemed to me a new revelation for mothers in their dealings with their children.

This book of [yours] seems a new revelation of how these children of the streets may be won and saved to useful members of the community.

I have never read anything which has moved me more profoundly, and I can scarcely read it without tears; tears both of sympathy and regret for the careless, indifference with which this whole subject has been treated even in our smaller cities. [page 2]

Last friday I reviewed this book at our ladies Society of our Congregational Church, and put it on the hearts of the twenty-two women who were present, as I shall again at the Civics department of the Woman's Club, and I wrote a short review of it for The Club Bulletin which will be out April 1st, for I want every women in the Illinois Federation to read it who has conscience towards God and His least creatures the children of the toilers.

To write a book like that is better than to possess untold wealth, for it is to make rich in that which is imperishable.

For two years I have been on the program committee of the D.A.R. and this year succeeded in getting some subjects which belong to a newer ideal of patriotism among them -- The citizens part in government, also women in government, Child Labor, and my own paper on Changing Attitude towards War.

The discussion has been most helpful and everyone seems to have enjoyed each one.

We have such as these all the time in our Civics dept. of the Woman's Club, and the suffrage cause is growing very strong here.

Many men wish the splendid women of Decatur could vote at the April election, for we again have the question of "wet" or "dry" submitted. [page 3]

No doubt we will do our usual part of praying in the churches, and serving lunches; but these things seem only half of what might be done with a small ballot which should read that this shall not return to saloon territory.

Such ballots counted by the thousands are far more convincing to brewers and saloon keepers than any unseen force, however much many of us believe in such.

A strong battle is on, and we expect to win again. Two years ago we won by 1048 majority, and put out sixty three saloons.

The town was never so prosperous, and there were never so many children in school well shod, or so many laboring men buying their own homes.

Another thing the daily paper here which is a strictly temperance paper, that will not take a whiskey "ad", made $11.000 more in its advertising department last year than the other daily which is on the "wet" side.

This shows a strong sentiment in favor of temperance when [advertisers] stand by the paper which is on that [page 4] side.

I am sending you our calendar which shows our church work, as women, and it is progressive in every way.

Believe me again with sincere appreciation and admiration for all you are doing to make the world a better place to live in. 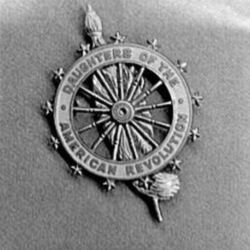 Bacon praises Addams' book The Spirit of Youth and the City Streets and writes about the progressive activities in which the women of her town are engaged.