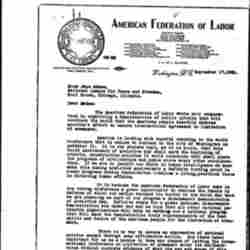 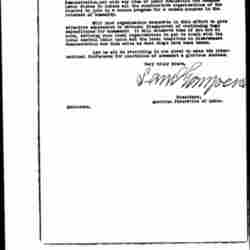 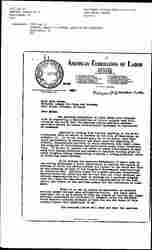 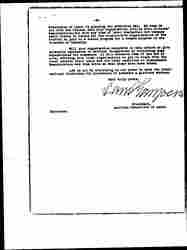 The American Federation of Labor wants your cooperation in organizing a demonstration of public opinion that will convince the world that the American people heartily endorse America's effort to secure international agreement to limitation of armament.

America is looking with hopeful yearning to the world conference that is called to convene in the city of Washington on November 11. It is our sincere hope, as it is yours, that this third anniversary of Armistice Day shall mark the beginning of orderly, constructive policies in world relations that shall place the progress of civilization and peace above every other consideration. If we are to justify our faith in human intelligence we must make this coming armistice anniversary a definite turning point in human progress making humanitarian idealism a living, practical force in directing human affairs.

It is because the American Federation of Labor sees in the coming conference a great opportunity to realize the ideals in defense of which our nation assumed its burden in the world war that we are planning as part of our program a disarmament demonstration of Armistice Day. Definite steps for a great national disarmanment demonstration are under way and we hope that all other national patriotic organizations will help in working out a national program that will make the demonstration truly representative of the real spirit and desire of the American people for the limitation of armament.

There is no way to secure an expression of national opinion except through some affirmative action. The issue is too important for us as a people to take any chance of letting the International Conference on Limitation of Armament enter its deliberations without concrete evidence of what the men and women of this country desire that conference to do.

The enclosed letter will show you what the American [page 2] Federation of Labor is planning for Armistice Day. We come to you with the request that your organization join in this citizens' demonstration, not with any idea of labor domination but because Labor wishes to induce all the constructive organizations of the country to join in a common program for a common purpiose in the interest of humanity.

Will your organization cooperate in this effort to give effective expression to national disapproval of continuing huge expenditures for armament? It will conserve time if you act at once advising your local organizations to get in touch with the local central labor union and the local committee on disarmament demonstration and then write me what steps have been taken.

Let us all do everything in our power to make the International Conference for Limitation of Armament a glorious success. 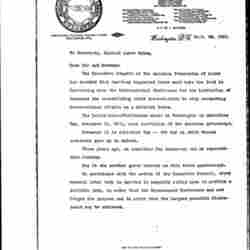 Gompers asks Addams and the WILPF to participate in the American Federation of Labor's Armistice Day plans.