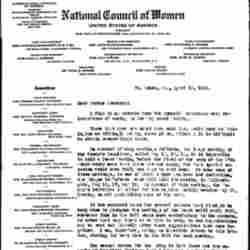 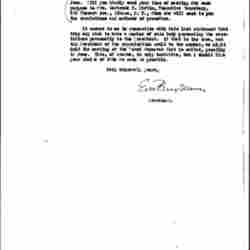 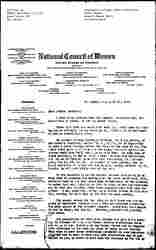 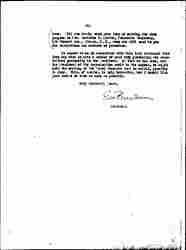 I find in my returns from the Council Presidents very few intentions of coming to the May Board Meeting.

Those that have responded have said they would come to Washington as willingly as any other place, although it is difficult to obtain reservations there.

On account of many meetings following the large meeting of the Woman's Committee, called May 13, 14, 15, it is impossible to hold a Board Meeting before the first of the week of the 27th which would mean that those who are coming for that special occasion would have fully ten days to wait over. To name some of these meetings, to one of which I know you have had an invitation, the League to Enforce Peace will hold its meeting in Philadelphia, May 16, 17, and 18. On account of this meeting, the Woman's Committee is called for its regular monthly session May 20, lasting in all probability most of the week.

It has occurred to me for several reasons that it might be very wise to postpone the meetings of the Board until early fall, whatever time in the fall seems most satisfactory to the members, in order that such items as we wish to bring to our organizations may be sent out directly after these organizations have come together. I am, therefore, asking an immediate return to this letter, stating the best time in the fall for such meeting.

The second reason for the delay is that there are two reports of Committee Chairmen that I have not received edited for the main report of the National Council. Therefore, that report is not in shape, but can be, I believe, prepared for printing this month.

The Association of Collegiate Alumnae has just had a meeting in Chicago and they have formed certain resolutions which are to go to the President of the United States and to Congress with reference to the work and place of women in war service. They wish to have these resolutions presented to your organization and ask to know at what time such resolutions may be presented to you, in order to have them all returned by the 1st of [page 2] June. Will you kindly send your time of meeting for such purpose to Mrs. Gertrude S. Martin, Executive Secretary, 934 Stewart Ave., Ithaca, N.Y., when she will send to you the resolutions and methods of procedure.

It occurs to me in connection with this last statement that they may wish to have a member of each body presenting the resolutions personally to the President. If that is the case, and the President of the organization could be the member, we might hold the meeting of the Board whenever that is called, possibly in June. This, of course, is only tentative, but I should like your choice of date as soon as possible. 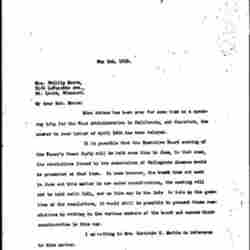 Moore requests that Addams give dates for a Board meeting in the fall, since many women cannot attend ones scheduled earlier.