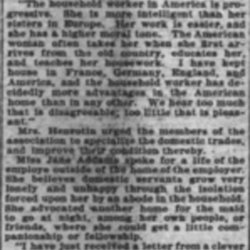 UNION AS AID TO MAID.

Mrs. Henrotin Talks on the Benefit of Organization.

Mrs. Charles M. Henrotin wants a union of housewives formed at once. She told the Workingwomen's Association about it last night at a meeting held in Recital Hall at the Auditorium. This association is composed of servant girls who have lately banded themselves into a union.

Mrs. Henrotin, in a dainty gown of black and white, spoke for an organization of employers as well as [employees], believing that better conditions for both would come with the dignity of united opinion.

The speaker was sincere in her remarks, yet she didn't tell what ought to happen if the employers' lodge met in the same night as that of the [employees']. If the maid were permitted to go, should the mistress volunteer to boil her own coffee in the morning? She didn't ask this question.

Mrs. Henrotin couldn't quite see why housemaids should be dyed in pessimism. She continued:

"The household worker in America is progressive. She is more intelligent than her sisters in Europe. Her work is easier, and she has a higher moral tone. The American woman often takes her when she first arrives from the old country, educates her, and teaches her housework. I have kept house in France, Germany, England, and America, and the household worker has decidedly more advantages in the American home than in any other. We hear too much that is disagreeable; too little that is pleasant."

Mrs. Henrotin urged the members of the association to specialize the domestic trades, and improve their condition thereby.

Miss Jane Addams spoke for a life of the [employee] outside of the home of the employer. She believes domestic servants grow very lonely and unhappy through the isolation forced upon her by an abode in the household. She advocated another home for the maid to go at night, among her own people, or friends, where she could get a little companionship or fellowship.

"I have just received a letter from a clever young woman I know," Miss Addams continued, "telling me she wanted to attend a university this fall and get a Ph.D. She would be glad to do housework as a means to the Ph.D. end, but she could not live with the family by whom she would be employed."

Miss Addams advised employers to distinguish the reasonable from the unreasonable, and told the [employees] to come into a knowledge of each other through organization. She, too, spoke for specialization in the work of the housemaid.

H. J. Sheffington of the Boot and Shoe Workers said: "The reason more girls do not organize is because they are afraid of losing their jobs."

W. A. Campbell of the Cigar-Makers' Union felt badly for the girls who pass lemonade and gin fizzes on front porches at night, and asked their [employees] to get night servants or bartenders to do this work.

James H. Bowman, president of the Chicago Federation of Labor, said: "The woman who does housework has a tough job. When she is not working she is worrying. A domestic is not a menial, and housework is more in woman's sphere than fancy work. Organization alone can improve the conditions."

Addams and Henrotin discuss the need to form a union for housewives at a meeting of the Chicago Workingwoman's Association.