And Now Arlington Is to Have a Community Plant for Dehydrating Foods, June 5, 1917 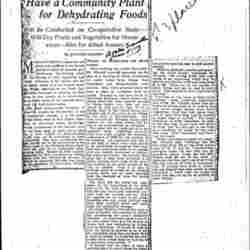 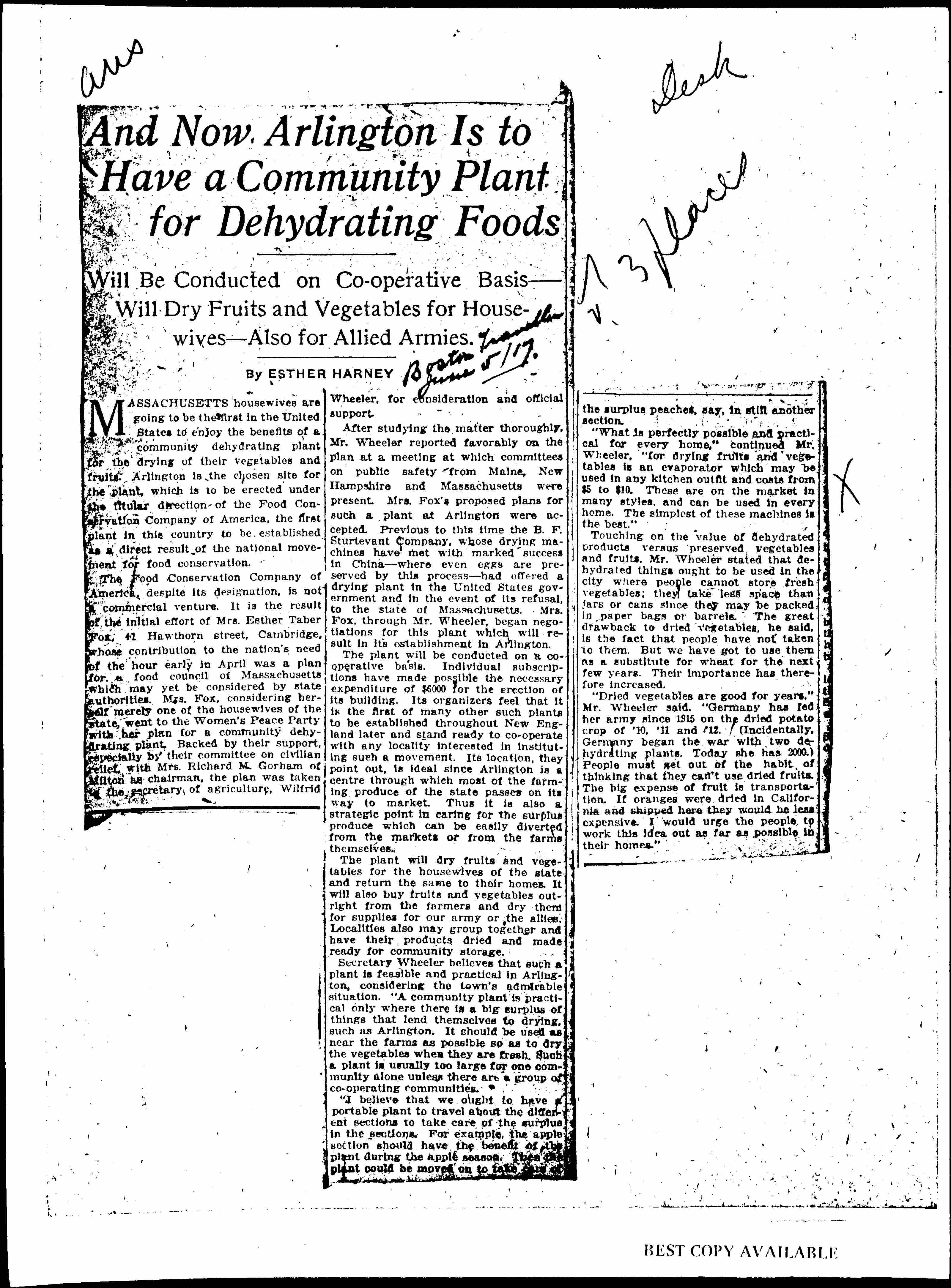 Will Be Conducted on [Cooperative] Basis -- Will Dry Fruits and Vegetables for Housewives -- Also for Allied Armies.

MASSACHUSETTS housewives are going to be the first in the United States to enjoy the benefits of a community dehydrating plant for the drying of their vegetables and fruits. Arlington is the chosen site for the plant, which is to be erected under the titular direction of the Food Conservation Company of America, the first plant in this county to be established as a direct result of the national movement for food conservation.

The Food Conservation Company of America, despite its designation, is not a commercial venture. It is the result of the initial effort of Mrs. Esther Taber Fox, 41 Hawthorn Street, Cambridge, whose contribution to the nation's need of the hour early in April was a plan for a food council of Massachusetts which may yet be considered by state authorities. Mrs. Fox, considering herself merely one of the housewives of the state, went to the [Woman's] Peace Party with her plan for a community dehydrating plant. Backed by their support, especially by their committee on civilian relief, with Mrs. Richard M. Gorham of Milton as chairman, the plan was taken to the secretary of agriculture, Wilfrid Wheeler, for consideration and official support.

After studying the matter thoroughly, Mr. Wheeler reported favorably on the plan at a meeting at which committees on public safety from Maine, New Hampshire and Massachusetts were present. Mrs. Fox's proposed plans for such a plant at Arlington were accepted. Previous to this time the B. F. Sturtevant Company, whose drying machines have met with marked success in China -- where even eggs are preserved by this process -- had offered a drying plant in the United States government and in the event of its refusal, to the state of Massachusetts. Mrs. Fox, through Mr. Wheeler, began negotiations for this plant which will result in its establishment in Arlington.

The plant will be conducted on a cooperative basis. Individual subscriptions have made possible the necessary expenditure of $6000 for the erection of its building. Its organizers feel that it is the first of many other such plants to be established throughout New England later and stand ready to [cooperate] with any locality interested in instituting such a movement. Its location, they point out, is ideal since Arlington is a [center] through which most of the farming produce of the state passes on its way to market. Thus it is also a strategic point in caring for the surplus produce which can be easily diverted from the markets or from the farms themselves.

The plant will dry fruits and vegetables for the housewives of the state and return the same to their homes. It will also buy fruits and vegetables outright from the farmers and dry them for supplies for our army or the allies. Localities also may group together and have their products dried and made ready for community storage.

Secretary Wheeler believes that such a plant is feasible and practical in Arlington, considering the town's admirable situation. "A community plant is practical only where there is a big surplus of things that lend themselves to drying, such as Arlington. It should be used as near the farms as possible so as to dry the vegetable when they are fresh. Such a plant is usually too large for one community alone unless there are a group of [cooperating] communities.

"What is perfectly possible and practical for every home," continued Mr. Wheeler, "for drying fruits and vegetables is an evaporator which may be used in any kitchen outfit and costs from $5 to $10. These are on the market in many styles, and can be used in every home. The simplest of these machines is the best."

Touching on the value of dehydrated products versus preserved vegetables and fruits, Mr. Wheeler stated that dehydrated things ought to be used in the city where people cannot store fresh vegetables; they take less space than jars or cans since they may be packed in paper bags or barrels. The great drawback to dried vegetables, he said, is the fact that people have not taken to them. But we have got to use them as a substitute for wheat for the next few years. Their importance has therefore increased.

"Dried vegetables are good for years," Mr. Wheeler said. "Germany has fed her army since 1915 on the dried potato crop of '10, '11 and '12. (Incidentally, Germany began the war with two dehydrating plants. Today she has 2000.) People must get out of the habit of thinking that they can't use dried fruits. The big expense of fruit is transportation. If oranges were dried in California and shipped here they would be less expensive. I would urge the people to work this idea out as far as possible in their homes." 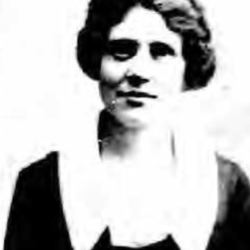 Harney reports on the establishment of a dehydrating plant in Massachusetts.

And Now Arlington Is to Have a Community Plant for Dehydrating Foods, Boston Traveler, June 5, 1917