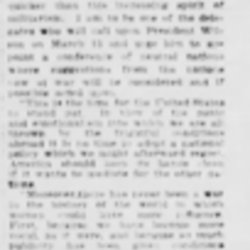 JANE ADDAMS DOWN ON ROOSEVELT PLAN.

Says the American Legion is "Absolutely Unnecessary and Shocking."

Miss Jane Addams does not agree with Theodore Roosevelt. In a speech yesterday morning at the Cort Theater before the members of the Woman's Peace Party she referred to his project in regard to the American Legion as "not only absolutely unnecessary but shocking."

"There has never been a time," continued Miss Addams, "when the United States has been so safe as it is [today], partly because the warring Nations are too busy dismembering each other to pay any attention to us and partly because as their own resources decline ours go up.

"To start a project like the American Legion with the purpose of preparing every one for war is very wrong. There is nothing that will drag us into war quicker than this increasing spirit of militarism. I am to be one of the delegates who will call upon President Wilson on March 13 and urge him to appoint a conference of neutral Nations where suggestions from the Nations now at war will be considered and if possible acted upon.

"This is the time for the United States to stand pat. In view of the panic and emotionalism into which we are all thrown by the frightful conditions abroad it is no time to adopt a National policy which we might afterward regret. America should keep its hands clean if it wants to mediate for the other nations.

"Moreover, there has never been a war in the history of the world in which women could have more influence. First, because we have become more vocal, as it were, and because so much publicity has been given conditions abroad in spite of the strict censorship that the full horror of war from the woman's standpoint is just beginning to burst on people.

"The system of polygamy established in Mohammedan countries during war times in order to rear more warriors for the State is decent compared with the awful conditions left in Europe in the wake of invading armies. In France the Church has sanctioned things which have formerly been considered sins, and I hear from Berlin that a huge corps of doctors and nurses have been sent out by the German Government to care for the Belgian women in the besieged towns and to bring them back to Germany as German citizens.

"The women of Europe feel that they have endured all that they can and will stand no more. It was hard enough for women to send their husbands and sons to war when they felt moved by a great impulse of patriotism, but now that they are beginning to feel the futility and wicked waste of it all they will draw the line. Women can do this more easily than men, since they cannot be accused of cowardice.

"We are opposed to every approach of military spirit in this country," concluded Miss Addams. "The installation of military drill in the public schools is a danger and will surely not be welcomed by the parents of our little immigrants who have just escaped the frightful war scourge of Europe. More than that, it is silly to talk of our being drawn into this war when every battleship that is crippled in Europe adds another to our own fleet.

"We shall try everything in our power to stimulate the peace feeling in this country. Peace lectures will be given and a peace normal course where pupils may take lessons in peace will also be established." 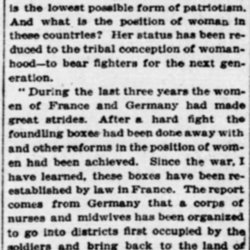 Addams denounces the newly formed American Legion as a project that could lead the United States into war and argues for conscious efforts to spread peace. The speech was made at the Cort Theater to the Woman's Peace Party on March 5.