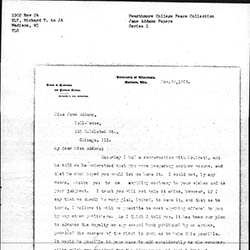 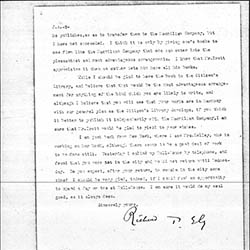 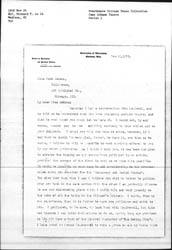 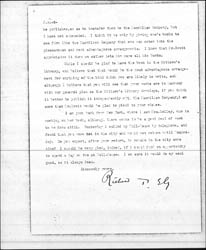 Saturday I had a conversation with Mr. Brett, and he told me he understood that you were preparing another volume, and that he much hoped you would let us have it.  I would not, by any means, desire you to do anything contrary to your wishes and to your judgment.  I trust you will not take it amiss, however, if I say that we should be very glad, indeed, to have it, and that as to terms, I believe it will be possible to meet anything offered to you by any other publishers.  As I think I told you, it has been our plan to advance the royalty on any second book published by an author, provided the success of the first is such as to make this possible.  It would be possible in your case to add considerably to the renumeration which you received for the "Democracy and Social Ethics". You also know that when I say I believe you will do better to publish your new book in the same series with the other I am perfectly sincere.  We are now elaborating plans which I think will add very greatly to the sale of all the books in the Citizen's Library.  I think, from my own experience, that it is better to have one publisher and stick to him.  I published, to be sure, my last book with Mr. Crowell, but this was because I was under obligations to do so, having long ago promised to let him have a book of the general character of "The Coming City". I have tried to induce Mr. Crowell to make a price on all my books which [page 2] he publishes, so as to transfer them to the Macmillan Company, but I have not succeeded.  I think it is only by giving one's books to one firm like the Macmillan Company that one can enter into the pleasantest and most advantageous arrangements.  I know that Mr. Brett appreciates it when an author lets him have all his books.

While I should be glad to have the book in the Citizen's Library, and believe that that would be the most advantageous arrangement for anything of the kind which you are likely to write, and although I believe that you will see that your works are in harmony with our general plan as the Citizen's Library develops, if you think it better to publish it independently with the Macmillan Company, I am sure that Mr. Brett would be glad to yield to your wishes.

I am just back from New York, where I saw Mrs. Kelley, who is working on her book, although there seems to be a good deal of work to be done still.  Yesterday I called up Hull-House by telephone, and found that you were not in the city and would not return until Wednesday.  Do you expect, after your return, to remain in the city some time? I should be very glad, indeed, if I could find an opportunity to spend a day or two at Hull-House.  I am sure it would do my soul good, as it always does. 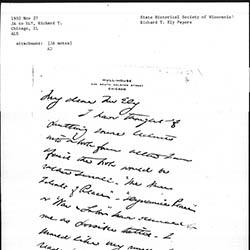 Ely inquires if Addams will consider publishing her next book with him at Citizen's Library.