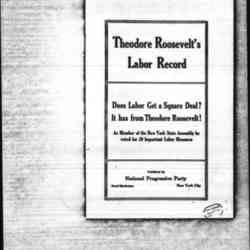 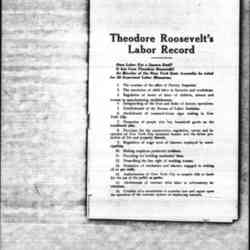 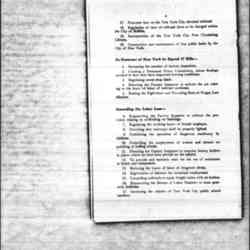 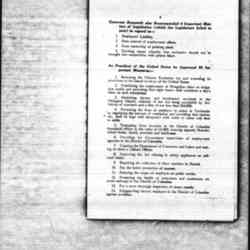 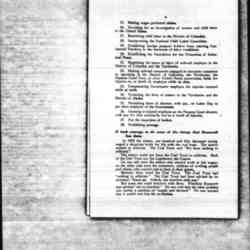 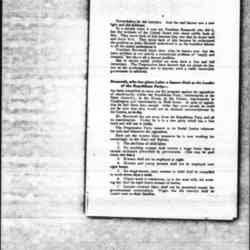 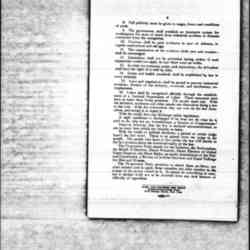 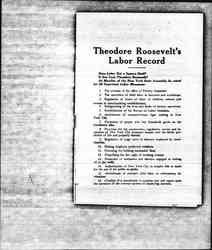 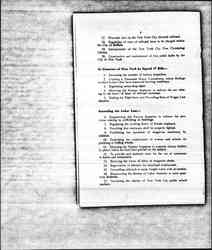 Does Labor Get a Square Deal?

It has from Theodore Roosevelt!

Does Labor Get a Square Deal?

It has from Theodore Roosevelt!

As Member of the New York State Assembly he voted for 20 Important Labor Measures:

1. The creation of the office of Factory Inspector.

2. The restriction of child labor in factories and workshops.

3. Regulation of hours of labor of children, minors and women in manufacturing establishments.

4. Safeguarding of the lives and limbs of factory operatives.

5. Establishment of the Bureau of Labor Statistics.

7. Protection of people who buy household goods on the installment plan.

8. Provision for the construction, regulation, survey and inspection of New York City tenement houses, and the better protection of life and property therein.

9. Regulation of wage rates of laborers employed by municipalities.

13. Protection of mechanics and laborers engaged in sinking oil or gas wells.

14. Authorization of New York City to acquire title to lands for the use of the public as parks.

16. Creation of a commission to examine into and report upon the operation of the contract system of employing convicts. [page 3]

18. Regulation of rates of railroad fares to be charged within the City of Buffalo.

20. Construction and maintenance of free public baths by the City of New York.

As Governor of New York he Signed 17 Bills --

1. Increasing the number of factory inspectors.

2. Creating a Tenement House Commission, whose findings resulted in laws that have improved housing conditions.

4. Directing the Factory Inspector to enforce the act relating to the hours of labor of railroad workmen.

6. Empowering the Factory Inspector to enforce the provision relating to scaffolding on buildings.

8. Providing that stairways shall be properly lighted.

9. Prohibiting the operation of dangerous machinery by children.

10. Forbidding the employment of women and minors on polishing or buffing wheels.

11. Directing the Factory Inspector to examine factory boilers in places where no local laws prevail on the subject.

12. To provide and maintain seats for the use of waitresses in hotels and restaurants.

13. Reducing the hours of labor of drugstore clerks.

14. Registration of laborers for municipal employment.

16. Empowering the Bureau of Labor Statistics to issue quarterly bulletins.

4. Devising means whereby free mechanics should not be brought into competition with prison labor.

As President of the United States he Approved 28 Important Measures --

1. Renewing the Chinese Exclusion Act and extending its provisions to the island territory of the United States.

2. Prohibiting the employment of Mongolian labor on irrigation works and providing that eight hours shall constitute a day's labor on such enterprises.

3. Abolishing slavery and involuntary servitude in the Philippine Islands, violation of the Act being punishable by forfeiture of contracts and a fine of not less than $10,000.

4. Protecting the lives of [employees] in mines in Territories by regulating the amount of ventilation and providing that entries, etc., shall be kept well dampened with water to cause coal dust to settle.

5. Exempting from taxation in the District of Columbia household effects to the value of $1,000, wearing apparel, libraries, school books, family portraits and heirlooms.

6. Providing for Government supervision of employment agencies in the District of Columbia.

7. Creating the Department of Commerce and Labor and making its head a Cabinet Officer.

8. Improving the Act relating to safety appliances on railroad trains.

9. Requiring the collection of labor statistics in Hawaii.

10. For the better protection of seamen.

11. Securing the wages of [employees] on public works.

12. Protecting the health of motormen and conductors on street railways in the District of Columbia.

13. For a more thorough inspection of steam vessels.

14. Safeguarding factory [employees] in the District of Columbia against accidents. [page 5]

16. Providing for an investigation of women and child labor in the United States.

17. Restricting child labor in the District of Columbia.

20. Establishing the Foundation for the Promotion of Industrial Peace.

21. Regulating the hours of labor of railroad [employees] in the District of Columbia and the Territories.

22. Making railroad companies engaged in interstate commerce or operating in the District of Columbia, the Territories, the Panama Canal Zone, or other United States possessions, liable for injuries to, or death of, [employees] while on duty.

23. Compensating Government [employees] for injuries received while at work.

24. Protecting the lives of miners in the Territories and the District of Alaska.

25. Permitting leave of absence, with pay, on Labor Day to per diem [employees] of the Government.

26. Granting to injured [employees] on the Panama Canal absence, with pay for time necessarily lost as a result of injuries.

27. For the inspection of boilers.

It took courage to do some of the things that Roosevelt has done.

In 1902 the miners, one hundred and fifty thousand strong, waged a desperate battle for life with the coal trust. The minders wanted to arbitrate. The Coal Trust said "We have nothing to arbitrate."

But some one could interfere with them. President Roosevelt was advised "not to interfere." He was told that the labor problem was merely a question of "supply and demand." He was warned that it would cost him his re-election. [page 6]

Nevertheless he did interfere. And the coal barons saw a new light and did arbitrate.

President Roosevelt knew then, what he knows now, that the labor problem is not merely a commercial problem of "supply and demand," but above all a human problem.

But to secure social justice we must have a free and full democracy. The Progressives have learned that we cannot do justice to the workingman, nor to anyone, until a really democratic government is achieved.

Roosevelt, who has given Labor a Square Deal as the Leader of the Republican Party --

Mr. Roosevelt has cut away from the Republican Party and all its reactionaries. Today he is in a new party which has a free hand and will use it freely.

Here are the sixteen labor measures he is now working for unceasingly in the State and Nation:

1. The abolition of child labor.

2. No working woman shall receive a wage lower than a certain minimum prescribed by government. (She may be paid more, not less.)

3. Women shall not be employed at night.

4. Women and young persons shall not be employed over eight hours.

5. No wage-earner, man, woman or child shall be compelled to work seven days a week.

6. Where work is continuous, as in the steel mills, the working day shall be eight hours instead of twelve.

7. Convict contract labor shall not be permitted except for governmental consumption. Wages due the convicts shall be turned over to their families. [page 7]

8. Full publicity must be given to wages, hours and conditions of work.

9. The government shall establish an insurance system for workingmen for cases of death from industrial accident or diseases contracted from the occupation.

10. Pensions shall be paid workmen in case of sickness, irregular employment and old age.

11. The organization of the workers -- both men and women -- shall be encouraged.

12. Injunctions shall not be permitted during strikes if such injunctions would not apply in case there were no strike.

13. In trials for contempt under such injunctions, the defendant shall have the right of a trial by jury.

14. Safety and health standards shall be established by law in every industry.

15. Laws and regulations shall be passed to prevent industrial accidents, diseases of the industry, overwork, and involuntary unemployment.

16. Labor shall be recognized officially through the establishment of a National Department of Labor. These measures need laws to make them living promises. The people must rule. With the initiative, workmen and other people can themselves bring a law to the vote. With the referendum they can vote on the law themselves, and accept it or reject it.

With the recall, they can discharge unfair legislators.

A night watchman is discharged if he does not do what he is paid to do, why not an Assemblyman, a Senator or Congressman?

Suppose, however, that the law is declared unconstitutional, as are so many laws which are friendly to labor.

With the recall of judicial decisions, a partial or unfair judge hasn't the last word. There is an appeal from the judge to the people. The people who have to live under the law will decide in the last instance about the constitutionality of the law.

The Progressive Party stands for the Initiative, the Referendum, the Recall of Decision, Direct Primaries, Direct Election of United States Senators, the Short Ballot, an easier Amendment of the Federal Constitution, a Review of Judicial Decisions and Equal Suffrage for Men and Women.

The Progressive Party promises to attack these problems one after another and to apply these remedies one after another to the extent of the power vested in it. It cannot do everything at once, but it pledges itself not to be diverted from any task because of difficulty or opposition.