The Need of a Public Ownership League, June 1916 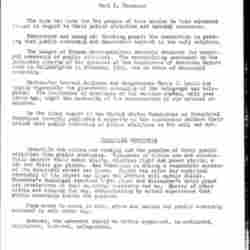 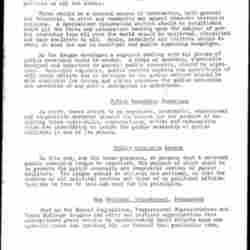 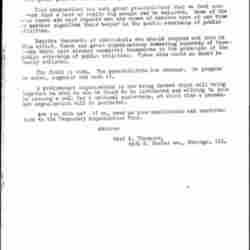 THE NEED OF A PUBLIC OWNERSHIP LEAGUE

The time has come for the people of this nation to take advanced ground in regard to their public utilities and natural resources.

Everywhere and among all thinking people the conviction is growing that public ownership and democratic control is the only solution.

The League of Kansas Municipalities recently declared for municipal ownership of public utilities. The overwhelming sentiment in the published reports of the speeches at the Conference of American Mayors held in Philadelphia in November, 1914, was in favor of municipal ownership.

Postmaster General Burleson and Congressman David J. Lewis are urging vigorously the government ownership of the telegraph and telephone. The Conference of Governors of the various states, held some years ago, urged the necessity of the conservation of our natural resources.

In the final report of the United States Commission on Industrial Relations recently published a majority of the commission declare their belief that public ownership of public utilities is the only way out.

Meanwhile the cities are working out the problem of their public utilities [through] public ownership. Thousands of cities own and successfully operate their water plants, electric light and power plants; a few own their gas plants, San Francisco is making a remarkable success of its municipal street car lines. Toledo has voted for municipal ownership of its street car lines and Detroit will surely follow. Pasadena's municipal electric light plant and Milwaukee's water plant are revelations of what municipal ownership can do. Scores of other cities are blazing the way, demonstrating by actual experience that public ownership solves the problem.

From ocean to ocean in city, state and nation the public ownership movement is well under way.

However, the movement should be better organized, [coordinated], reinforced, directed, safeguarded. [page 2]

Each city is fighting its battle more or less alone. Giant corporate interests are organized to cripple public ownership where in operation and to defeat it when proposed. Cities should be leagued together. Each should have the advantage of the knowledge and experience of all the others.

There should be a central source of information, both general and technical, to which any community may appeal whenever necessity requires. A specialized information service should be established where all the facts and information bearing upon the subject of public ownership from all over the world should be collected, classified and made available to all. Books, pamphlets and leaflets should be ready at hand for use in municipal and public ownership campaigns.

As the league developed a magazine dealing with all phases of public ownership would be needed. A corps of speakers, especially equipped and competent to present public ownership, should be organized. Municipal engineers, public service experts and specialists of well known ability and of devotion to the public welfare should be made available for cities and states wherever the public ownership and operation of any public enterprise is undertaken.

In short, there should be an organized, systematic, educational and cooperative movement [throughout] the nation for the purpose of assisting those individuals, organizations, cities and communities which are undertaking to secure the public ownership of public utilities in any of its phases.

To this end, and for these purposes, we propose that a national public ownership league be organized, the purpose of which shall be to promote the public ownership and democratic control of public utilities. The league should be entirely [nonpartisan], so that the members of all political parties and those of no political affiliation may be free to join and work for its principles.

Just as the Direct Legislation, Proportional Representation and Woman Suffrage leagues and other [nonpartisan] organizations have accomplished great results by concentrating their efforts upon one specific issue and inviting all who favored that particular idea, [page 3] in a similar way a [nonpartisan] public ownership league could accomplish great good in the field of public ownership.

This proposition has such great possibilities that we feel confident that a host of really big people can be enlisted. Some of the best known and most capable men and women of America have at one time or another signified their belief in the public ownership of public utilities.

Besides thousands of individuals who should respond and join in this effort, there are great organizations numbering hundreds of thousands which have already committed themselves to the principle of the public ownership of public utilities. These also could no doubt be easily enlisted.

The field is wide. The possibilities are immense. We propose to enter, organize and work it.

A preliminary organization is now being formed which will bring together as many as can be found to be interested and willing to join in issuing a call for a national conference, at which time a permanent organization will be perfected.

Are you with us? If so, send us your application and contribution to the Temporary Organization Fund. 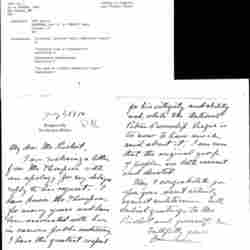 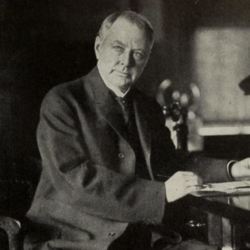 Thompson explains the need for the National Public Ownership League and its goal of public ownership and democratic control over utilities and natural resources.