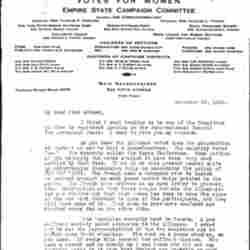 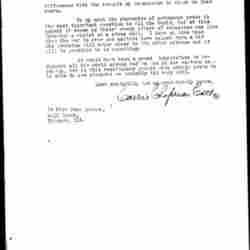 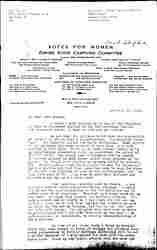 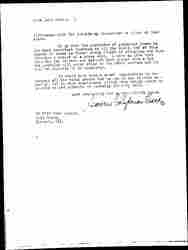 I think I must decline to be one of the Committee of Five to represent America on the International Council for Permanent Peace. I want to give you my reasons.

As you know the Alliance voted upon the proposition of whether or not to hold a Peace Congress. The majority voted "no." The minority called the Hague Conference. Some portion of the majority who voted against it have been very much nettled by that fact. There is at this present moment quite an embarrassing discussion going on concerning the policy of JUS SUFFRAGII. The French sent a delegate over to London to protest against so much peace matter being printed in the paper. The French have written me an open letter to protest, etc. Correspondence with these people reveals the illuminating and distressing fact that peace has come to mean the close of the war with dishonor to some of the participants, and they will have none of it. They seem to grow more confused and bigoted every day on the other side.

Miss Macmillan recently went to Canada. A new suffrage society asked admission to the Alliance. I asked her to see the representatives of the two societies and to report upon their standing. She went on a peace mission, as you know. It seems this queered her suffrage mission. She made a speech and so nearly as I can learn she did not say anything worse in it than that England was probably as much to blame for the war as Germany, but the papers set upon her like wild beasts. The [clippings] they have sent me would be unbelievable had I not seen them with my own eyes -- so narrow-minded, so intolerant, so utterly uncomprehending of noble motives.

In view of all these facts I think my mission which will come sooner or later of pulling the Alliance into order preparatory to further suffrage activities will be not a little impaired if I ally myself too much with the peace activities. Since my own feeble efforts will not make any [page 2] difference with the results my conscience is clear on that score.

To my mind the guarantee of permanent peace is the most important question in all the world, but at this moment it seems as though every effort of education was like throwing a violet at a stone wall. I have an idea that when the war is over and matters have calmed down a bit the pendulum will swing clear to the other extreme and it will be possible to do something.

It would have been a great inspiration to reformers all the world around had we won in our eastern campaigns, but in this reactionary period when nobody seems to be able to see straight we probably did very well.

Most gratefully and appreciatively yours,

Catt explains her reasons for not accepting Addams' invitation to be a representative on the International Council for Permanent Peace.

Jane Addams wrote at the top of the first page: "ans'd, to be filed."