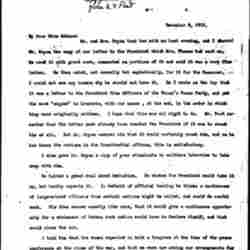 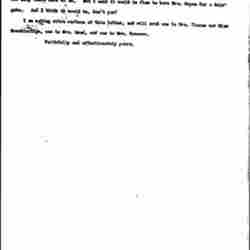 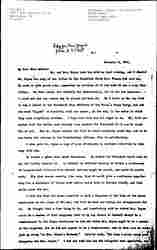 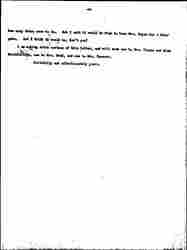 Mr. and Mrs. Bryan took tea with us last evening, and I showed Mr. Bryan the copy of our letter to the President which Mrs. Thomas had sent me. He read it with great care, commented on portions of it and said it was a very fine letter. He then asked, not casually but emphatically, for it for the Commoner. I could not see any reason why he should not have it. So I wrote on the top that it was a letter to the President from Officers of the Women's Peace Party, and put the word "signed" in brackets, with our names, at the end, in the order in which they were originally written. I hope that this was all right to do. Mr. Post remarked that the letter must already have reached the President if it was to reach him at all. But Mr. Bryan assured him that it would certainly reach him, and as he has known the customs in the Presidential offices, this is satisfactory.

I also gave Mr. Bryan a copy of your stimulants to soldiers interview to take away with him.

We talked a great deal about Mediation. He wishes the President would take it up, but hardly expects it. In default of official backing he thinks a conference of large-minded citizens from neutral nations might be called, and could do useful work. His idea seemed exactly like ours, that it would give a continuous opportunity for a statement of terms; each nation would have to declare itself, and that would clear the air.

I told him that the women expected to hold a Congress at the time of the peace conference at the close of the war, and that we were now making our arrangements for it. He thought that a fine thing to do, and immediately said he wished Mrs. Bryan could be a member of that Congress; that if by any chance he himself should be a commissioner to the Peace Conference he did not think Mrs. Bryan ought to be a member of the Congress, but he did not expect to be a Commissioner, and in that case he would just go along "as Mrs. Bryan's Husband." Later he said, "Now keep a place among your delegates for Mrs. Bryan." I did not tell him how the delegates were appointed, nor [page 2] how many there were to be. But I said it would be fine to have Mrs. Bryan for a delegate. And I think it would be, don't you?

Post relates to Addams her conversation with Bryan about the Woman's Peace Party's letter to the President and plans for a Congress after peace is achieved in Europe.

At the top of the first page, an unknown person wrote: "Copy for Mrs Mead from A. T. Post."