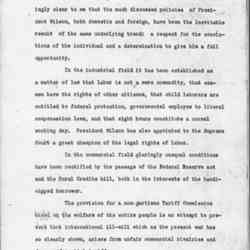 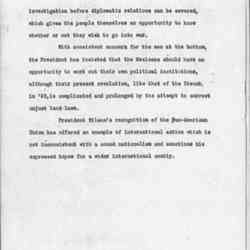 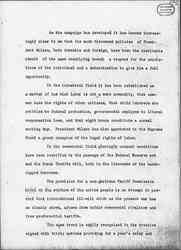 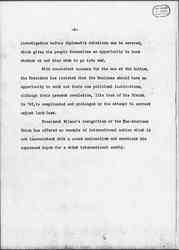 As the campaign has developed it has become increasingly clear to me that the much discussed policies of President Wilson, both domestic and foreign, have been the inevitable result of the same underlying trend: a respect for the convictions of the individual and a determination to give him a full opportunity.

In the industrial field it has been established as a matter of law that labor is not a mere commodity, that seamen have the rights of other citizens, that child laborers are entitled to federal protection, governmental [employees] to liberal compensation laws, and that eight hours constitute a normal working day. President Wilson has also appointed to the Supreme Court a great champion of the legal rights of labor.

In the commercial field glaringly unequal conditions have been rectified by the passage of the Federal Reserve act and the Rural Credits bill, both in the interests of the handicapped borrower.

The provision for a non-partisan Tariff Commission based on the welfare of the entire people is an attempt to prevent that international ill-will which as the present war has so clearly shown, arises from unfair commercial rivalries and from preferential tariffs.

The same trend is easily recognized in the treaties signed with thirty nations providing for a year's delay and [page 2] investigation before diplomatic relations can be severed, which gives the people themselves an opportunity to know whether or not they wish to go into war.

With consistent concern for the man at the bottom, the President has insisted that the Mexicans should have an opportunity to work out their own political institutions, although their present revolution, like that of the French in '93, is complicated and prolonged by the attempt to correct unjust land-laws.

President Wilson's recognition of the Pan-American Union has offered an example of international action which is not inconsistent with a sound nationalism and sanctions his expressed hopes for a wider international comity. 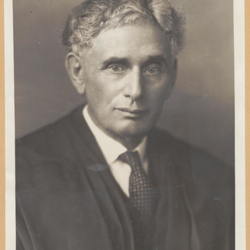 Addams endorse Woodrow Wilson in the 1916 election because of his track record of respect for providing individuals with opportunity.