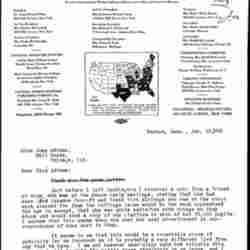 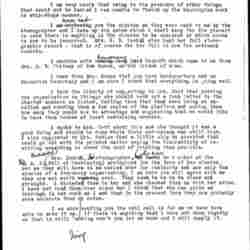 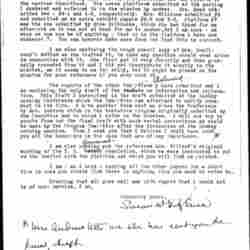 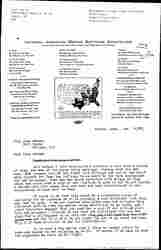 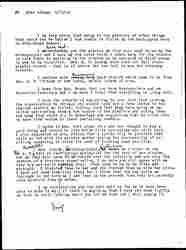 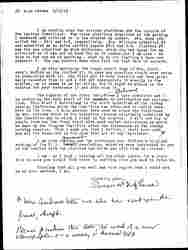 Thank you for your letter.

Just before I left Washington I received a note from a friend of mine, who was at the Peace Party meetings, stating that she had seen Miss [Susanna] Cocroft and found that although she was at the start much alarmed for fear the Suffrage issue would be too much emphasized for her to accept, that she was quite satisfied with things as they stood and would send a copy of our platform to each of her 70,000 pupils. I assume that this means when she sent her next [advertisement] or correspondence of some sort to them.

It seems to me that this would be a remarkable piece of publicity for us insomuch as it is probably a very different list from any that we have. I am not however absolutely sure how reliable this statement will be when the matter comes absolutely to an issue, and I would therefore suggest that you send her a copy of our printed platform and preamble -- stating to her that you understand that she has signified a willingness to do this and that you will send her the platforms and ask her if it will be all right for you to go ahead and have 70,000 of them delivered to her for distribution.

It is such a big matter that I think we cannot afford to take any chance on her slipping up on it. Of course if we have it over her signature we shall be all right. [page 2]

I am very sorry that owing to the pressure of other things that could not be denied I was unable to finish up the Washington work in ship-shape manner.

I am enclosing <have sent> you the minutes as they were sent to me by the stenographer and I have my own notes which I shall keep for the present in case there is anything in the minutes to be compared or which seems to you to be incorrect. Mrs. R. B. Ezekiel also kept her full stenographic record -- that is of course far too full to use for ordinary records.

I enclose note coming from <concerning> Miss Cocroft which came to me from Mrs. E. B. Whitney of New Haven, an old friend of mine.

I hear from Mrs. Evans that you have headquarters and an Executive Secretary and I am sure I trust that everything is going well.

I took the liberty of suggesting to Mrs. Post that pending the organization in Chicago she should send out a form letter to the charter members as listed, telling them that they were being so enrolled and sending them a few copies of the platform and asking them how many they could use to advantage and suggesting that we would like to have them become at least sustaining members.

I spoke to Mrs. Catt about this and she thought it was a good thing and should be done while their enthusiasm was still high. I also suggested to Mrs. Rublee that a little slip be provided that could go out with the printed matter urging the desirability of remitting something to cover the cost of printing when possible.

Mrs. Ezekiel, <the> stenographer, (who could <who can> be reached at the D. A. R., <Continental> Hall at Washington), apologized for the form of her minutes, but as they will have to be worked over for publicity and are only the minutes of a temporary organization, I am sure you will agree with me they are not worth working <doing> over. They seem to me to be clear and straight. I dictated them to her and she checked them up with her notes. I have not read them over since but I think that she was quite as thorough in her work as I and that in the present form they are probably more accurate than my notes.

I am also sending you the roll call so far as we have been able to make it up. If there is anything that I have not done rightly or that is still lacking won't you let me know and I will supply it. [page 3]

I am sending also the various platforms and the reports of the various Committees. The seven platforms submitted at the meeting I numbered and referred to in the minutes by number. Mrs. Mead submitted two -- #4-1 and 4-2, respectively. Mrs. Williams submitted #5 and submitted as an extra exhibit papers #5-2 and 5-3. Platform #7 was the one submitted by Miss [Holbrook], which she had typed for me afterward so it was not at hand for me to number, but I am sure -- as sure as one can be of anything -- that [it] is the platform I have now numbered 7. You can however make sure from her that this is correct.

I am also enclosing the rough pencil copy of Mrs. Smallwood's motion as she drafted it, in case any question should ever arise in connection with it. She first put it very formally and then gradually receded from it and I did not incorporate it exactly in the minutes, as it seems to me too silly, but it might be pinned on the minutes for your reference if you ever wish it.

The reports of the other Committees I have submitted and I am enclosing the only draft of the statute <statement> on information and explanation. This draft I understand is the draft submitted at the Sunday morning Conference which the Committee was afterward to modify somewhat in its form. I have another form sent me since the Conference by Mrs. Andrews which is the tentative program originally submitted by the Committee and to which I refer in the minutes. I will now try to secure from her the final draft with such verbal corrections as would be made by the Program Committee after the discussion at the Sunday morning session. When I send you that I believe I shall have sent you all the documents in the case that are of any importance.

I am also sending you for reference Mrs. Villard's original wording of the U.S. Armant <Armament> resolution, which we were instructed to put on the leaflet with the platform and which you will find so printed.

I am -- as I said -- keeping all the other papers for a short time in case you should find there is anything else you need to refer to.

Trusting that all goes well and with regret that I could not be of more service, I am,

<*Mrs Andrews tells me she has sent you the final draft.

Please pardon this letter, the work of a new stenographer & a weary & hurried S. W. F.> 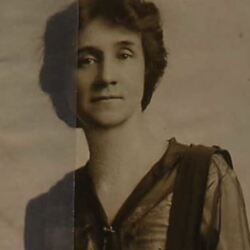 FitzGerald writes Addams regarding Susanna Cocroft's offer to send a copy of the Peace Party platform to her pupils and some minutes from the recent conference.

Enclosures mentioned are not known to be extant.