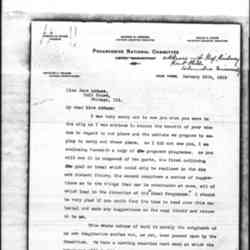 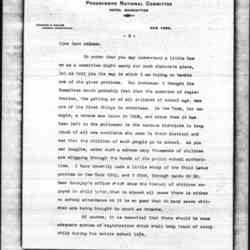 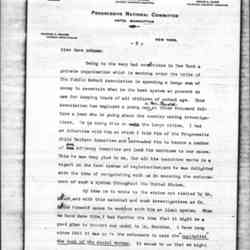 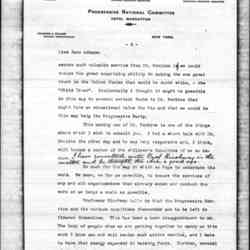 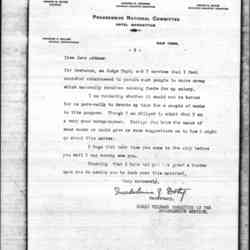 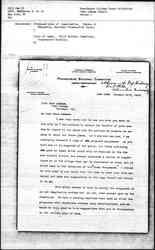 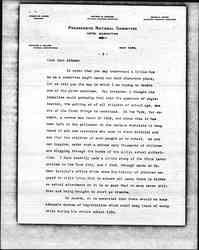 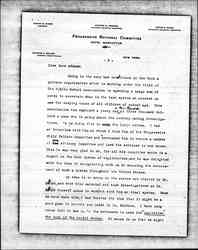 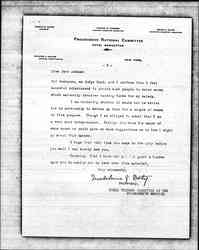 I was very sorry not to see you when you were in the city as I was anxious to secure the benefit of your wisdom in regard to our plans and the methods we propose to employ to carry out those plans. As I did not see you, I am enclosing herewith a copy of a proposed [program]. As you will see it is composed of two parts, the first outlining a goal or ideal which could only be realized in the dim and distant future; the second comprises a series of suggestions as to the things that can be undertaken at once, all of which lead in the direction of the "Ideal [Program]." I should be very glad if you could find the time to read over this material and make any suggestions on the copy itself and return it to me.

This whole scheme of work is merely the outgrowth of my own imagination and has not, as yet, been passed upon by the Committee. We have a meeting sometime next week at which the [program] will doubtless undergo many modifications, and we would be very glad to have suggestions from you to incorporate in the revised plan of work. [page 2]

In order that you may understand a little how we as a committee might carry out such elaborate plans, let me tell you the way in which I am trying to handle one of the given problems. For instance: I thought the Committee would probably feel that the question of registration, the getting at of all children of school age, was one of the first things to undertake. In New York, for example, a census was taken in 1909, and since then it has been left to the policemen in the various districts to keep track of all new residents who come to their district and see that the children of such people go to school. As you can imagine, under such a scheme many thousands of children are slipping through the hands of the public school authorities. I have recently made a little study of the Child Labor problem in New York City, and I find, through cards in Mr. Owen Lovejoy's office which show the history of children engaged in child labor, that in almost all cases there is either no school attendance or it is so poor that in many cases children are being brought to court as truants.

Of course, it is essential that there should be some adequate system of registration which shall keep track of every child during his entire school life. [page 3]

Owing to the very bad conditions in New York a private organization which is working under the title of The Public School Association is spending a large sum of money to ascertain what is the best system at present in use for keeping track of all children of school age. This Association has employed a young man, <a Mr. Nudd,> at three thousand dollars a year who is going about the country making investigations. He is doing this in only the large cities. I had an interview with him at which I told him of the Progressive Child Welfare Committee and persuaded him to become a member of the <our> Advisory Committee and lend his services to our cause. This he was very glad to do, for all his committee wants is a report on the best system of registration; and he was delighted with the idea of [cooperating] with us in securing the enforcement of such a system throughout the United States.

My idea is to write to the states not visited by Mr. Nudd, and with this material and such investigations as Mr. Nudd himself makes to work out with him an ideal system. When we have done this, I had further the idea that it might be a good plan to present our model to Mr. Perkins. I have long since felt it was up to the reformers to make the "capitalist" the tool of the social worker. It seems to me that we might [page 4] secure much valuable service from Mr. Perkins if we could secure his great organizing ability in making the one great trust in the United States that would be [worthwhile], -- the "Child Trust". Incidentally I thought it might be possible in this way to present certain facts to Mr. Perkins that might have an educational value for him and that we could in this way help the Progressive Party.

This making use of Mr. Perkins is one of the things about which I wish to consult you. I had a short talk with Mr. Perkins the other day and he was very responsive and, I think, will become a member of the children's Committee if we so desire. <I have consulted with Prof. Kirchwey in the matter and he thought the idea a good one.>

So much for the way in which we hope to undertake the work. We mean, as far as possible, to secure the services of any and all organizations that already exist and conduct the work on as large a scale as possible.

Professor Kirchwey tells me that the Progressive Service and the various committees thereunder are to be left to finance themselves. This has been a keen disappointment to me. The body of people whom we are getting together to carry on this work I know can and will render much active service, and I hate to have that energy expended in raising funds. Further, several of the people who go on the Committee are personal friends, such, [page 5] for instance, as Judge Hoyt; and I confess that I feel somewhat embarrassed to permit such people to raise money which naturally involves raising funds for my salary.

I am wondering whether it would not be better for me personally to devote my time for a couple of weeks to this purpose. Though I am obliged to admit that I am a very poor money-raiser. Perhaps you know the names of some women or could give me some suggestions as to how I might go about this matter.

I hope that next time you come to the city before you sail I may surely see you.

Trusting that I have not put too great a burden upon you in asking you to look over this material, Doty sends Addams a proposed plan for the National Progressive Party Bureau of Education and asks for feedback.