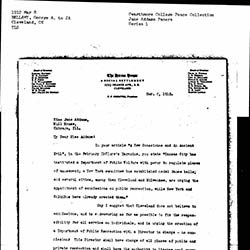 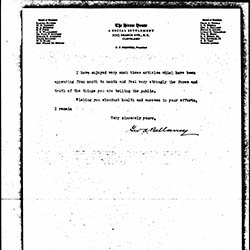 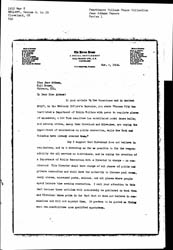 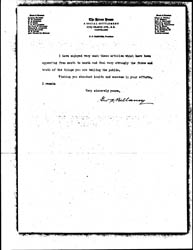 In your article "A New Conscience and An Ancient Evil", in the February McClure's Magazine, you state "Kansas City has instituted a Department of Public Welfare with power to regulate places of amusement; a New York committee has established model dance halls; and several cities, among them Cleveland and Milwaukee, are urging the appointment of commissions on public recreation, while New York and Columbus have already created them."

May I suggest that Cleveland does not believe in commissions, and is endeavoring as far as possible to fix the responsibility for all service on individuals, and is urging the creation of a Department of Public Recreation with a Director in charge -- no commission? This Director shall have charge of all phases of public and private recreation and shall have the authority to license pool rooms, candy stores, amusement parks, saloons, and all places where people spend leisure time seeking recreation. I call your attention to this fact because these articles will undoubtedly be published in book form and Cleveland takes pride in the fact that it does not believe in commissions and will not appoint them. It prefers to be quoted as fixing such responsibilities upon qualified appointees. [page 2]

I have enjoyed very much these articles which have been appearing from month to month and feel very strongly the force and truth of the things you are telling the public.

Wishing you abundant health and success in your efforts, I remain

Bellamy praises Addams for her series in McClure's Magazine but also points out a small mistake in the February installment.