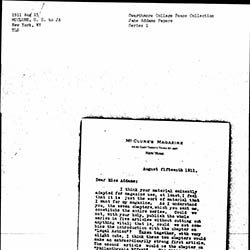 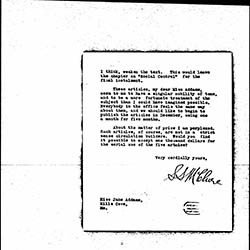 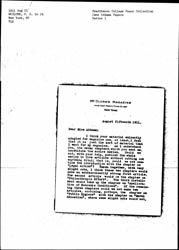 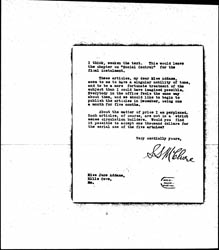 I think your material eminently adapted for magazine use, at least, I feel that it is just the sort of material that I want for my magazine. As I understand you, the seven chapters which you sent me, constitute the entire series. Could we not, with your help, publish the whole series in five articles without cutting out anything vital; that is, could we not combine the introduction with the chapter on "Legal Action"? Taken together, with very slight cuts, I think these two chapters would make an extraordinarily strong first article. The second article would be the chapter on "Philanthropic Effort". The third installment would take up the chapter on "Amelioration of Economic Conditions". Of the remaining three chapters could we not make two articles, combining, perhaps, the chapter on "Public Hygiene" with the chapter on "Moral Education", where some slight cuts would not, [page 2] I think, weaken the text. This would leave the chapter on "Social Control" for the final installment.

These articles, my dear Miss Addams, seem to me to have a singular nobility of tone, and to be a more fortunate treatment of the subject than I could have imagined possible. Everybody in the office feels the same way about them, and we should like to begin to publish the articles in December, using one a month for five months.

About the matter of price I am perplexed. Such articles, of course, are not in a strict sense circulation builders. Would you find it possible to accept one thousand dollars for the serial use of the five articles? 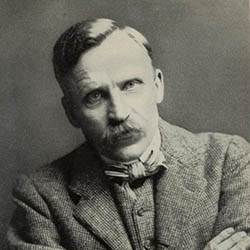 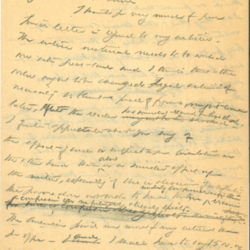 McClure writes Addams about adapting her manuscript for A Newer Conscience and an Ancient Evil from seven to five chapters for serialized publication in McClure's Magazine, and he offers her $1,000 for the five articles.