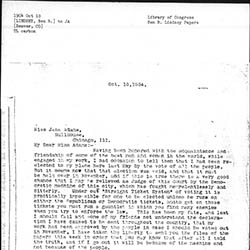 Having been honored with the acquaintance and friendship of some of the best men and women in the world, while engaged in my work, I had occasion to tell them that I had been re-elected to my place here last May by the vote of all the people. But it seems now that that election was void, and that it must be held over in November, and if this is true there is a very good chance that I may be relieved as Judge of this Court by the Democratic machine of this city, which has fought relentlessly and bitterly. Under our "Straight Ticket System" of voting it is practically impossible for one to be elected unless he runs on either the Republican or Democratic tickets, and to get on those tickets you must run a gauntlet in which you find many enemies when you try to enforce the law. This has been my fate, and lest I should fail and some of my friends not understand the declaration I have caused to be sent throughout the country, that my work had been approved by the people in case I should be voted out in November, I have taken the liberty to send you the files of the papers this week in order that you may know that after all I told the truth, and if I go out it will be because of the machine and not because of people.

Having the honor of your acquaintance and that of Miss Lathrop, with whom I have talked about my work here, I have taken the liberty to burden you with the matter if you care to know the facts, because I should be greatly chagrinned, humiliated and mortified, if after being elected six months ago I should be now defeated.

I expect to win but if I [do] not I want those friends of mine whom I honor and respect in the East, and who have been interested in the work to know the reason why.

If you will be so good as to communicate this to Miss Lathrop I shall be obliged as it is very hard for me to keep up with my correspondence. 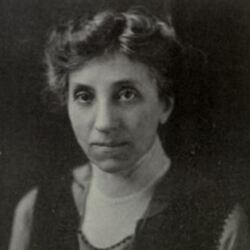 Lindsey tells Addams about efforts to vote him out as judge of the juvenile court.