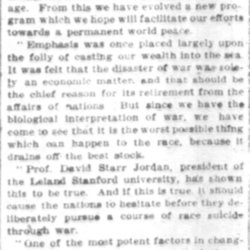 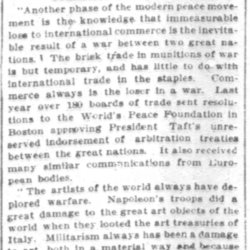 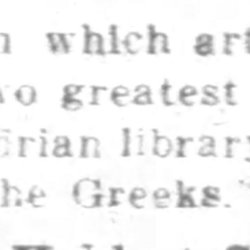 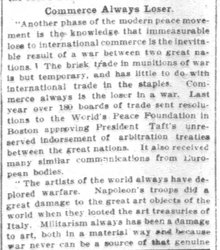 Miss Jane Addams spoke before the Sunday Evening club on "Newer Aspects of the Peace Movement."

"The movement for world peace has assumed a significance and practical basis in the affairs of life hitherto unknown," she said. "At last we have gathered the data on the causes underlying war, tabulated its biological, economic, and general social wastage. From this we have evolved a new program which we hope will facilitate our efforts towards a permanent world peace.

"Emphasis was once placed largely upon the folly of casting our wealth into the sea. It was felt that the disaster of war was solely an economic matter, and that should be the chief reason for its retirement from the affairs of nations. But since we have the biological interpretation of war, we have come to see that it is the worst possible thing which can happen to the race, because it drains off the best stock.

"Prof. David Starr Jordan, president of the Leland Stanford university, has shown this to be true. And if this is true, it should cause the nations to hesitate before they deliberately pursue a course of race suicide through war.

"One of the most potent factors in changing the angle of our movement against war has been the recent marvelous development of aerial mechanics. Hitherto, ever since we have had a recorded history, we have had more or less well defined frontier lines guarded with costly fortifications. These have in a day suddenly become obsolete and worthless. Aerial warriors can with impunity destroy the costliest fortifications and change the entire frontier of a country. [Page 2]

"Another phase of the modern peace movement is the knowledge that immeasurable loss to international commerce is the inevitable result of a war between two great nations. The brisk trade in munitions of war is but temporary, and has little to do with international trade in the staples. Commerce always is the loser in a war. Last year over 180 boards of trade sent resolutions to the World's Peace Foundation in Boston approving President Taft's unreserved [endorsement] of arbitration treaties between the great nations. It also received many similar communications from European bodies.

"The artists of the world always have deplored warfare. Napoleon's troops did a great damage to the great art objects of the world when they looted the art treasuries of Italy. Militarism always has been a damage to art, both in a material way and because war never can be a source of that genuine [Page 3] spirituality from which art springs. War destroyed the two greatest works of antiquity, the Alexandrian library and the artistic productions of the Greeks." 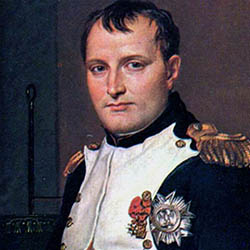 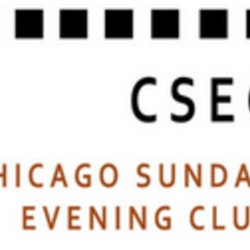 Newspaper report of Addams's speech before the Sunday Evening Club discussing new ideas about how to promote peace.