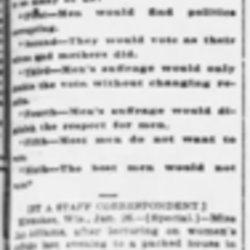 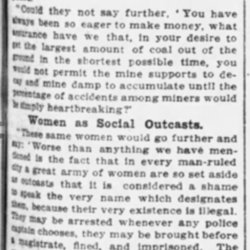 Jane Addams Discusses a Hypothetical Society Ruled Only by Women.

Reverses Common Objections to Show the Absurdity of Masculine Suffrage.

IF ONLY THE WOMEN COULD VOTE!

Miss Jane Addams, in a speech at Milwaukee last night, considered a hypothetical society in which enfranchised women gave their reasons why the ballot should be denied to men.

"What would be the state of the masculine mind," she said, "if the voting women should present to them only the following half dozen objections which are unhappily so familiar to so many of us?

"Second -- They would vote as their wives and mothers did.

"Third -- Men's suffrage would only double the vote without changing results.

"Fourth -- Men's suffrage would diminish the respect for men.

{BY A STAFF CORRESPONDENT.}

Milwaukee, Wis., Jan. 26. -- {Special} -- Miss Jane Addams, after lecturing on women's suffrage last evening to a packed house in Madison, was on hand here at noon today at a large luncheon for which she was the special guest. This evening she spoke again on suffrage before a house no less crowded and eager than the one of the night before.

She asked the audience this evening to consider a hypothetical society in which enfranchised womanhood gave their reasons to would-be man voters on why the ballot should be denied to males.

"First, could they not say, 'Our most valid objection to extending the franchise to you is that you are so fond of fighting and you always have been ever since you were little boys. You would be likely to forget that the real object of the state is to nurture and protect life and, out of sheer vainglory, you would be voting away huge sums for battleships, one of which could last only a few years, and yet would cost $10,000,000.'"

"Secondly, could she not say to [disenfranchised] men, 'We have carefully built up a code of factory legislation for the protection of the workers. We know you men have always been careless in housekeeping affairs and if you were made responsible for factory legislation it is probable you would let the workers in the textile mills contract tuberculosis through needlessly breathing the fluff, or the workers in machine shops inhale metal fillings, both of which are now carried off by an excellent [suction] system which we women have insisted upon, but which is almost impossible to have installed in a man-made state because the men think so little of dust and its evil effects.'

"We have also heard that in certain states, in order to save the paltry price of a guard which would protect a dangerous machine men legislators allow careless boys and girls to lose their fingers and sometimes their hands, thereby [crippling] their entire future." [page 2]

"These wise women governing the state with the same care they have always put into the government of their families would further charge the men who are seeking for the franchise that men do not really know how tender and delicate children are. They might put them to work in factories, as indeed they have done in man-made states ever since the beginning of the factory period.

"Could they not say further, 'You have always been so eager to make money, what assurance have we that, in your desire to get the largest amount of coal out of the ground in the shortest possible time, you would not permit the mine supports to decay and mine damp to accumulate until the percentage of accidents among miners would be simply heartbreaking?"

"These same women would go further and say: 'Worse than anything we have mentioned is the fact that in every man-ruled city a great army of women are so set aside as outcasts that it is considered a shame to speak the very name which designates them, because their very existence is illegal. They may be arrested whenever any police captain chooses, they may be brought before a magistrate, fined, and imprisoned. The men whose money sustains their houses, supplies their tawdry clothing, and provides them with intoxicating drinks are never arrested, nor, indeed, considered lawbreakers.'

"Did the enfranchised women speak thus to the disenfranchised men, the latter would at least respect their hesitation in regard to an extension of the ballot to them."

She then reversed and applied to men the common objections men make to granting the ballot to women. 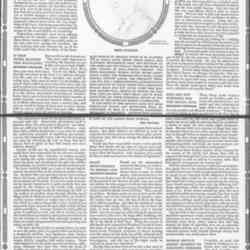 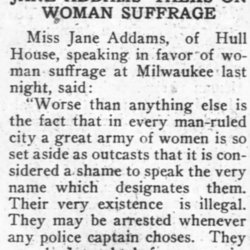 A newspaper report of Addams's speech to the Milwaukee branch of the Wisconsin Woman Suffrage Association, which  uses humor to render the male arguments against woman suffrage absurd. A version of this speech was later published in the Ladies' Home Journal.