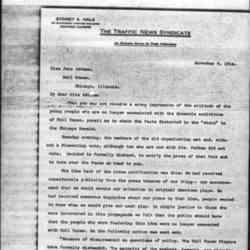 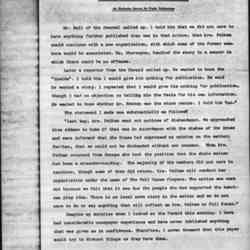 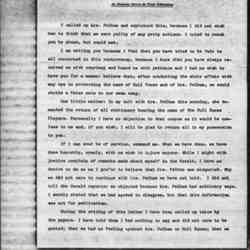 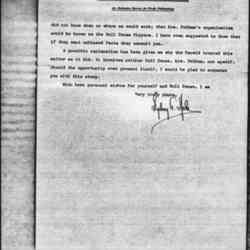 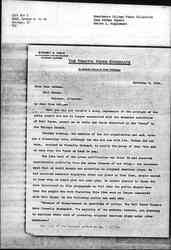 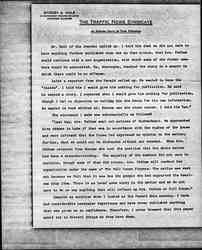 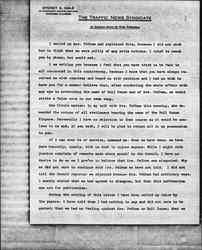 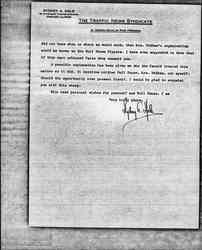 That you may not receive a wrong impression of the attitude of the young people who are no longer associated with the dramatic activities of Hull House, permit me to state the facts distorted in the "story" in the Chicago Herald.

Tuesday evening, the members of the old organization met and, without a dissenting vote, although two who are now with Mrs. Pelham did not vote, decided to formally disband, to notify the press of that fact and to turn over the funds on hand to you.

The idea back of the press notification was this: We had received considerable publicity from the press because of one thing -- our announcement that we would devote our attention to original American plays. We had received numerous inquiries about our plans in that line, people wanted to know when we would give our next play. In simple justice to those who were interested in this propaganda we felt that the public should know that the people who were fostering this idea were no longer connected with Hull House. So the following notice was sent out:

"Because of the disagreement on questions of policy, The Hull House Players have formally disbanded. The majority of the members, however, are planning to continue their work of producing original American plays under other auspices." [page 2]

Mr. Hall of the Journal called up. I told him that we did not care to have anything further published than was in that notice, that Mrs. Pelham would continue with a new organization, with which some of the former members would be associated. He, thereupon, handled the story in a manner in which there could be no offense.

Later a reporter from the Herald called up. He wanted to know the "inside". I told him I would give him nothing for publication. He said he wanted a story. I repeated that I would give him nothing for publication, though I had no objection to telling him the facts for his own information. He wanted to know whether Mr. Heaton was the storm center. I told him "no."

The statement I made was substantially as follows:

"Last May, Mrs. Pelham sent out notices of disbandment. We approached Miss Addams to know if that was in accordance with the wishes of the House and were informed that the House had expressed no opinion on the matter; further, that we could not be disbanded without our consent. When Mrs. Pelham returned from Europe she took the position that the whole thing had been a misunderstanding. The majority of the members did not care to continue, though some of them did return. Mrs. Pelham will conduct her organization under the name of the Hull House Players. The notice was sent out because we felt that it was due the people who had supported the American play idea. There is no local news story in the matter and we do not care to do or say anything that will reflect on Mrs. Pelham or Hull House."

Imagine my surprise when I looked at the Herald this morning. I have had considerable newspaper experience and have never published anything that was given me in confidence. Therefore, I never dreamed that this paper would try to distort things as they have done. [page 3]

I called up Mrs. Pelham and explained this, because I did not wish her to think that we were guilty of any petty actions. I tried to reach you by phone, but could not.

I am writing you because I feel that you have tried to be fair to all concerned in this controversy, because I know that you have always received us with courtesy and heard us with patience and I had no wish to have you for a moment believe that, after conducting the whole affair with any eye to protecting the name of Hull House and of Mrs. Pelham, we would strike a false note in our swan song.

One little matter: In my talk with Mrs. Pelham this morning, she demanded the return of all stationary bearing the name of the Hull House Players. Personally I have no objection to that course as it would be useless to us and, if you wish, I will be glad to return all in my possession to you.

If I can ever be of service, command me. What we have done, we have done honestly, openly, with no wish to injure anyone. While I might with justice complain of remarks made about myself in the Herald, I have no desire to do so as I prefer to believe that Mrs. Pelham was misquoted. Why we did not care to continue with Mrs. Pelham we have not told. I did not tell the Herald reporter we objected because Mrs. Pelham had arbitrary ways. I merely stated that we had agreed to disagree, but that information was not for publication.

During the writing of this letter I have been called up twice by the papers. I have told them I had nothing to say and did not care to be quoted; that we have no feeling against Mrs. Pelham or Hull House; that we [page 4] did not know when or where we would work; that Mrs. Pelham's organization would be known as the Hull House Players. I have even suggested to them that if they want unbiased facts they consult you.

A possible explanation has been given me why the Herald treated this matter as it did. It involves neither Hull House, Mrs. Pelham, nor myself. Should the opportunity ever present itself, I would be glad to acquaint you with this story.

With the best personal wishes for yourself and Hull House, I am

Hale discusses the disbandment of the Hull House Players.