Address to the Child Welfare Conference on Settlements, January 29, 1911 (excerpts) 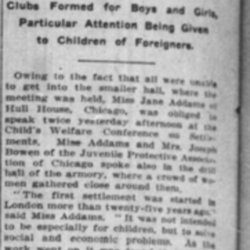 TELL WHAT CHICAGO DOES FOR CHILDREN
Jane Addams and Mrs. Joseph Bowen Both Speak in the Welfare Exhibit.
OUTLINE PROTECTIVE WORK
Clubs Formed for Boys and Girls, Particular Attention Being Given to Children of Foreigners.

Owing to the fact that all were unable to get into the smaller hall, where the meeting was held, Miss Jane Addams of Hull House, Chicago, was obliged to speak twice yesterday afternoon at the Child's Welfare Conference on Settlements, Miss Addams and Mrs. Joseph Bowen of the Juvenile Protective Association of Chicago spoke also in the drill hall of the armory, where a crowd of women gathered close around them.

"The first settlement was started in London more than twenty-five years ago," said Miss Addams. "It was not intended to be especially for children, but to solve social and economic problems. As the work went on it was found that nothing could be done without coming into initimate relations with homes and families, and in this way the workers soon found themselves giving their time and enthusiasm to the children. These workers were the first to become members of School Boards and to institute fresh-air work.

"More and more time should be given to the children of the street who are deprived of the things that belong to children. Unless there is more time and thought given to the raising of the children in the third or fourth generations we will find that there is no one to work with. It is wonderful that an exhibit like this can be held, but we must remember that there is nothing of the kind done. But it can be done. Let us work for the city child that it may not be deprived of its heritage."

Summary of Addams' arguments for child welfare and the role of settlements. Portions of the article summarizing other speakers were not included.