Charity and Its Motives as Seen by Jane Addams, November 14, 1902 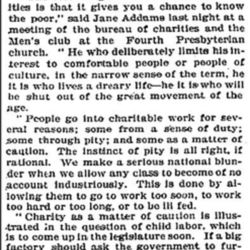 CHARITY AND ITS MOTIVES AS SEEN BY JANE ADDAMS.

Declares That He Who Fails to Help Relieve the Poor Leads a Dreary and Desolate Life.

"The best thing about the bureau of charities is that it gives you a chance to know the poor," said Jane Addams last night at a meeting of the bureau of charities and the Men's club at the Fourth Presbyterian church. "He who deliberately limits his interest to comfortable people or people of culture, in the narrow sense of the term, he it is who lives a dreary life -- he it is who will be shut out of the great movement of the age.

"People go into charitable work for several reasons; some from a sense of duty; some through pity; and some as a matter of caution. The instinct of pity is all right, if rational. We make a serious national blunder when we allow any class to become of no account industriously. This is done by allowing them to go to work too soon, to work too hard or too long, or to be ill fed.

"Charity as a matter of caution is illustrated in the question of child labor, which is to come up in the legislature soon. If a big factory should ask the government to furnish it machinery on the ground that it was a benefit to the country and at the end of five or ten years should come back to ask for more because that was all worn out, the government would inquire into the cause of such extravagance or carelessness.

"This happens constantly in the case of the little children. At the end of ten, fifteen, or twenty years the factory comes back and wants a new set of children, taught in the public schools to be prompt and obedient."

Addams holds that charitable work enables a better understanding of the poor, at a meeting of the Illinois Board of Charities and the Men's Club of the Fourth Presbyterian Church.

Charity and its Motives as Seen by Jane Addams, Chicago Daily Tribune, November 15, 1902.