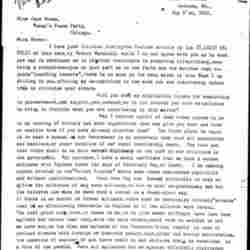 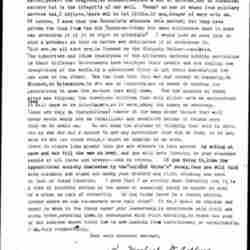 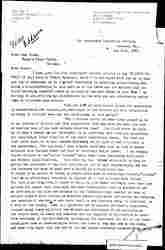 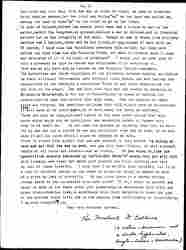 I have just finished reading the feature article in the ST. LOUIS REPUBLIC of this date, by Edward Marshall; while I do not agree with you as to what you say in substance as to clerical connivance in promoting illegitimacy, same being a misapprehension on your part as to the facts and the motives that require "foundling baskets", there is so much in the main which is true that I am writing to you, offering my [cooperation] in the work you are undertaking rather than to criticize your errors.

Will you send me application blanks for membership in your movement, and suggest, yes, command, me in the methods you have established to bring to fruition what you are undertaking in this matter?

May I express myself of some views gained by me in my reading of history and make suggestions that may give you some new view or confirm them if you have already observed them? The first place to begin is to make a demand on our Government in no uncertain tone that all ammunition and machines, or other supplies of war shall immediately cease. The rest are that there shall be no more secret diplomacy of the part of our officials in the government. For instance, I have a moral certitude that we have a secret alliance with England since the days of Secretary Hay, at least. I am reading papers printed in the "United Kingdom" which make those admissions [explicit] and without qualifications. When John Hay was forced officially to deny or affirm the existence of any such alliance, he did so most [ungraciously] and but few believed him when he made such a denial in a round-about way.

If there is no secret or formal alliance, there must be certainly a friendly "entente" that is as effectively favorable to England as if the alliance were formal.

The next great step, then, it seems to me, is to give women suffrage; have them then agitate and demand that they, with the male voters, shall vote on whether or not we have war, on the plan and methods of the Phoenico-Irish; namely: in case of serious dispute with foreign or domestic powers, that, after six months deliberation, the question of whether or not there shall be war declared shall be submitted to a vote of the people. Have all agitators for or against officially registered; include among those agitators the writers and publishers of all periodicals; the voters shall be named and numbered and the negative or affirmative of their vote recorded; if the affirmative carries, put the agitators for war in the front ranks, give them no commission, no matter how bravely they may act on the field, and make them fight till the end of the war unless otherwise incapacitated; [make] [page 2] the first man that will vote for war go first to fight; in case of reserves being made, or needed, let the first man voting "no" be the last man called on, making the last to vote "no" be the first to go to the front.

In case of defense, before the people shall have had a chance to act on the matter, permit the Congress, at present, declare a war of defense, not in financial matters but in the integrity of our soil. Exempt no man or woman from military service and, I believe, there [will] be but little, if any, danger of wars with us. Of course, I know that the Socialists advocate this method; but they have gotten the idea from the old Phoenico-Irish; but what difference does it make who advocates it if it is right in principle? I would just as soon join in such a movement as this no matter who originates it or advocates it.

This war, as all wars are, is founded on the Almighty Dollar -- markets.

The hypocrites and false countrymen of the different nations holding portfolios in their different Governments have betrayed their people and are fooling the thoughtless of the world, by a subsidized Press to get their approbation for one side or the other. See the loss that this war has caused to humanity, to Science, to Literature, to Art and to Industry, not to speak of marking for generations to come the [unborn] that will come. See the agonies of raped wives and virgins; the unwelcome children that will either have no mothers that [it] <they> will know or be interlopers, as it were, among the homes so sorrowed. These are only an insignificant number of the many other things that will occur which would rob an intelligent and sensitive person of reason were they to be dwelt on. Do not make the mistake of thinking that this is written by one who has a desire to see any particular side win or lose; it is not; were it not for these evils, I might be tempted to so wish.

Prove to others like myself that you are sincere in this matter by acting at once and not till the war is over, and you will have flocking to your standard people of all races and creeds -- and no creeds. If you delay it, like the hypocritical society dominated by the "Laird of Skibo's" money, then you will fail with ignominy and stand out among your sisters and right thinking men next to that of Judas Iscariot. I know that I am writing most forcibly; but it is a time of forceful action in the cause of humanity; delay is almost as much of a crime as lack of sincerity. Do you think there is a common meeting ground where we can [cooperate] with each other? If so, I shall be honored and happy to work in the ranks under your leadership, in accordance with civil and moral order, creating laws, in accordance with right morality, to reach the goal of our desires where civil law is now lacking from inefficiency or technicality. I am, very respectfully, 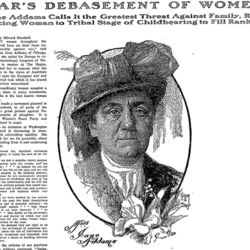 Collins reacts to an Addams interview, offering his views on ways to resist war.

"Miss Addams" is written on the top left corner of the page.