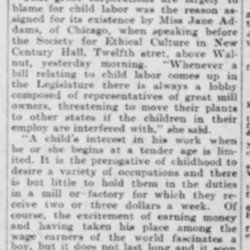 CHILD LABOR DUE TO CORPORATIONS

That great corporations are largely to blame for child labor was the reason assigned for its existence by Miss Jane Addams, of Chicago, when speaking before the Society for Ethical Culture in New Century Hall, Twelfth [street], above Walnut, yesterday morning. "Whenever a bill relating to child labor comes up in the Legislature there is always a lobby composed of representatives of great mill owners, threatening to move their plants to other states if the children in their employ are interfered with," she said.

"A child's interest in his work when he or she begins at a tender age is limited. It is the prerogative of childhood to desire a variety of occupations and there is but little to hold them in the duties in a mill or factory for which they receive two or three dollars a week. Of course, the excitement of earning money and having taken his place among the wage earners of the world fascinates a boy, but it does not last long and it soon becomes a drudgery.

"If a boy in beginning to work too early has learned to thoroughly detest his work before he reaches an age when it would be proper for him to begin, his character as an industrious man has been destroyed.

"It is far better to allow children to run the streets than to place them at work. If they do run the streets they will be found by the truant officer and he will place them in school. There are at present all stages of child labor legislation in this country, but the laws are gradually becoming uniform, and the compulsory education regulations have accomplished a great deal in the past ten years and now educators say the percentage of children who graduate from the higher school grades is becoming larger every year." 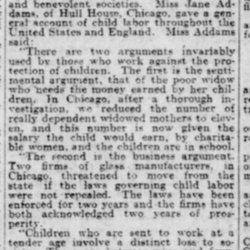 Speaking to the Society for Ethical Culture in Philadelphia, Addams argues that child labor is dangerous to the development of children's character and bodies.