The Home Life of the Child in the Congested Districts, September 24, 1905 (excerpt) 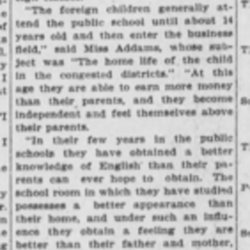 LOOK DOWN ON PARENTS

Special to The Herald.

CHICAGO, Sept. 24. -- "As soon as the child of foreign parentage attends the public school in this country long enough to obtain a ready knowledge of the English branches, he begins to feel himself better and above his parents."

This is the belief of Miss Jane Addams, member of the board of education, who is the first on the list of well known speakers to address normal school pupils on practical subjects in the course of the present school year. In her talk today she pointed particularly to the peculiar condition which she says exists emong the foreign classes.

"The foreign children generally attend the public school until about 14 years old and then enter the business field," said Miss Addams, whose subject was "The home life of the child in the congested districts." "At this age they are able to earn more money than their parents, and they become independent and feel themselves above their parents.

"In their few years in the public schools they have obtained a better knowledge of English than their parents can ever hope to obtain. The school room in which they have studied possessed a better appearance than their home, and under such an influence they obtain a feeling they are better than their father and mother, who plod along with a slight knowledge of American ways and affairs."

Miss Addams did not tell of a condition which she pointed out as having a baneful side without pointing to means by which the evil could be corrected.

"Americanize the foreign parents as well as the pupil of foreign parents," said Miss Addams. "Get hold of them and have them attend public meetings in public halls, listen to lectures on America and their native land as well, in their mother tongue if necessary. You will find such a movement will place the foreign parents in a rank alongside of their child who has had a few years' advantage of the public schools."

Miss Addams spoke to the pupils in the large study room, and her talk last an hour. On each Friday throughout the school year a well known Chicagoan will talk to the pupils. 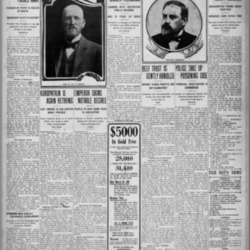 Addams speaks to the Chicago Normal School about the relationship between immigrant parents and their school-aged children.