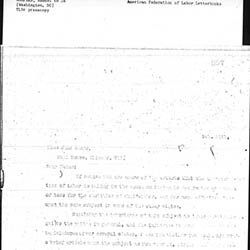 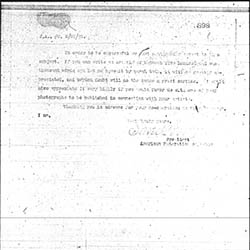 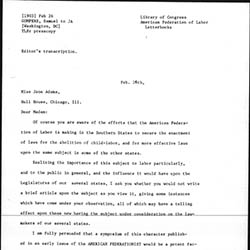 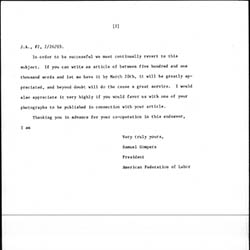 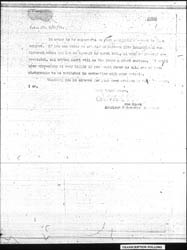 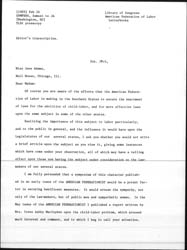 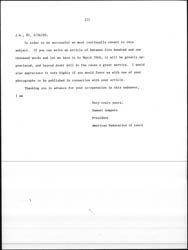 Of course you are aware of the efforts that the American Federation of Labor is making in the Southern States to secure the [enactment] of laws for the abolition of child-labor, and for more [effective laws] upon the same subject in some of the other states.

Realizing the importance of this subject to labor [particularly], and to the public in general, and the influence it [would have upon the] Legislatures of our several states, I ask you whether you would not write a brief article upon the subject as you view it, giving [some instances] which have come under your observation, all of which may have [a] telling effect upon those now having the subject under consideration [by the] law-makers of our several states.

I am fully persuaded that a symposium of [this character published] in an early issue of the AMERICAN FEDERATIONIST [would be a potent factor] in securing [beneficent] measures. It would arouse the sympathy, [not] only of the law-makers, but of public men and sympathetic women. In the May issue of the AMERICAN FEDERATIONIST I published a report written by Mrs. Irene Ashby Macfayden upon the child-labor problem, which aroused much interest and comment, and to which I beg to call your attention. [page 2]

In order to be successful we must continually revert to this subject. If you can write an article of between five hundred and one thousand words and let me have it by March [20th], it will be greatly appreciated, and beyond doubt will do the cause a great service. I would also appreciate it very highly if you would favor us with one of your photographs to be published in connection with your article.

Thanking you in advance for cooperation in this [endeavor], I am 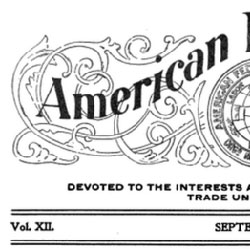 Gompers requests and article about child labor for the American Federationist, in order to gain public attention and sympathy.