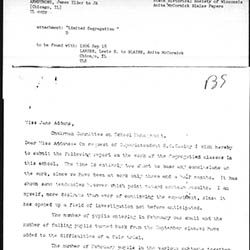 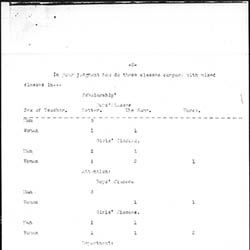 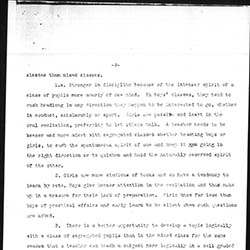 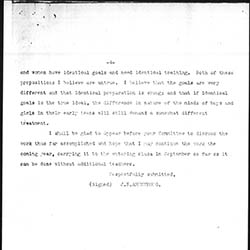 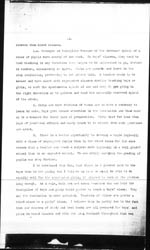 Dear Miss Addams:-- On request on Superintendent E. G. Cooley I wish hereby to submit the following report on the work of the segregated classes in this school. The time is entirely too short to base any conclusions on the work, since we have been at work only three and a half months. It has shown some tendencies however which point toward certain results. I am myself, more desirous than ever of continuing the experiment, since it has opened up a field of investigation not before anticipated.

The number of pupils entering in February was small and the number of failing pupils turned back from the September classes have added to the difference of a fair trial.

The number of February pupils in the various subjects together with certain other information will be found in the following table:

The eleven teachers were asked to report their opinions upon the following questions: [page 2]


Do you find any advantage in Segregation?

In addition to the report of the eleven teachers I would like to add some observations of my own:

1. It will require stronger teachers to teach segregated classes [page 3] than mixed classes.

1.a. Stronger in discipline because of the intenser sprit of a class of pupils more nearly of one mind. In boys' classes, they tend to rush heading in any direction they happen to be interested to go, whether in conduct, scholarship or sport. Girls are passive and invert in the oral recitation, ppreferring to let others talk. A teacher needs to be keener and more alert with segregated classes whether teaching boys or girls, to curb the spontaneous spirit of one and keep it going in the right direction or to quicken and hold the naturally reserved spirit of the other.

2. Girls are more studious of books and so have a tendency to learn by rote. Boys give keener attention in the recitation and thus make up in a measure for their lack of preparation. Girls know far less than boys of practical affairs and early learn to be silent when such questions are asked.

3. There is a better opportunity to develop a topic logically with a class of segregated pupils than in the mixed class for the same reason that teacher can teach a subject more logically in a well graded school than in an ungraded school. We are simply carrying the grading of pupils one step farther.

I am convinced thus far, that there is a greater gain to the boys than to the girls; but I believe in time we shall be able to do equally well for the segregated girls, if allowed to work at the problem long enough. As a rule, both men and women teachers who can hole the discipline of boys and girls would prefer to teach a boys' class. They say the recitation is more animated. Teachers of either sex prefer a mixed class to a girls' class. I believe this is partly due to the fact that our courses of study and text books are all prepared for boys and girls in mixed classes and with the idea dominant throughout that men [page 4] and women have identical goals and need identical training.  Both of these propositions I believe are untrue. I believe that the goals are very different and that identical preparation is wrong; and that if identical goals is the true ideal, the difference in nature of the minds of boys and girls in their early teens will still demand somewhat different treatment.

I shall be glad to appear before your Committee to discuss the work thus far accomplished and hope that I may continue the work the coming year, carrying it to the entering class in September so far [as] it can be done without additional teachers. 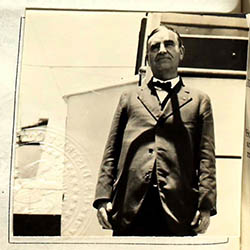 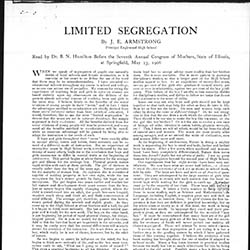 Armstrong writes to Addams about the differences between gender segregated and non-segregated classes and how women and men teach these classes differently.