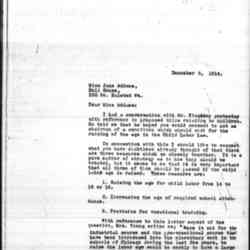 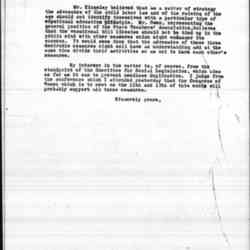 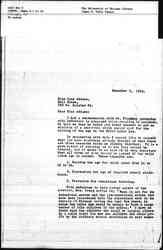 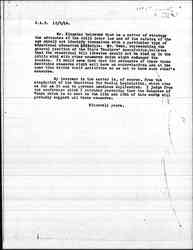 I had a conversation with Mr. Kingsley yesterday with reference to proposed bills relating to children. He told me that he hoped you would consent to act as chairman of a committee which should work for the raising of the age in the Child Labor Law.

In connection with this I should like to suggest what you have doubtless already thought of that there are three measures which go closely together. It is a pure matter of strategy as to how they should be treated, but it seems to me that it is very important that all three of them should be passed if the child labor age is raised. These measures are:

With reference to this latter aspect of the question, Mrs. Young writes me; "Were it not for the industrial course and the pre-vocational course that have been introduced into the elementary work in the schools of Chicago during the last few years, to raise the labor age would be merely to have a large number of idle children in the school." I have no doubt that the children who would be largely [affected] by a child labor law are not children who would profit by the ordinary school curriculum in most cases. [page 2]

Mr. Kingsley believed that as a matter of strategy the advocates of the child labor law and of the raising of the age should not identify themselves with a particular type of vocational education principle. Mr. Owen, representing the general position of the State Teachers' Association, believes that the vocational bill likewise should not be tied up in the public mind with other measures which might endanger its success. It would seem then that the advocates of these three desirable measures might well have an understanding and at the same time divide their activities so as not to harm each other's measures.

My interest in the matter is, of course, from the standpoint of the Committee for Social Legislation, which aims as far as it can to prevent needless duplication. I judge from the conference which I attended yesterday that the Congress of Women which is to meet on the 11th and 12th of this month will probably support all three measures. 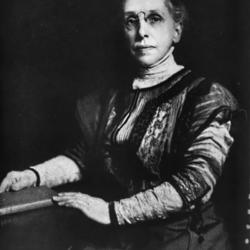