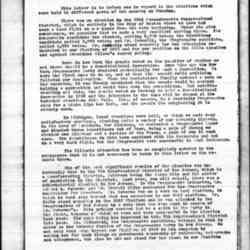 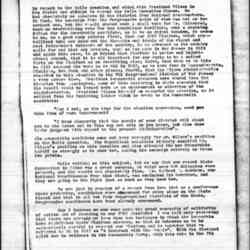 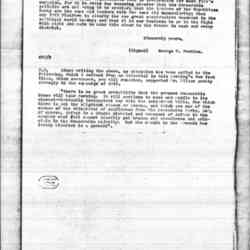 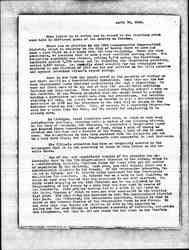 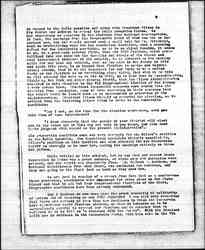 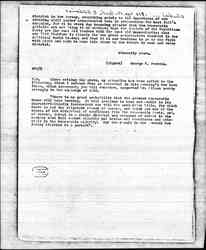 This letter is to inform you in regard to the elections which were held in different parts of the country on Tuesday.

There was an election in the 12th Massachusetts Congressional District, which is entirely in the City of Boston where we have had such a hard fight on our hands from the very beginning. Under the circumstances, we consider that we made a very excellent showing there. The Democratic candidate was elected, polling 8,708 votes; the Republican candidate, polled 3,973 votes; and Mr. Connolly, the Progressive candidate, polled 3,589 votes. Mr. Connolly stood squarely for the principles enumerated in our Platform of 1912 and for our position on the Tolls question and against President Wilson's repeal policy.

Here in New York the people voted on the question of whether or not there should be a Constitutional Convention. Some time ago the New York Progressive Party declared emphatically for such a Convention. We were the first ones to do so, and at that time considerable criticism followed our declaration. When the Legislature finally ordered a vote on the question, it was freely predicted that the people would be against holding a convention and would vote down the proposition. But notwithstanding all this, the people voted on Tuesday to hold a Constitutional Convention in 1915 and the delegates to the same will be chosen at the November elections this fall. This, of course, is a decidedly Progressive step for a State like New York, and the credit for organizing it is clearly ours.

In Michigan, local elections were held, at which we made very satisfactory showings, electing quite a number of our township tickets. In the town of Muskegon, for instance, we reelected a Progressive Mayor and elected three Supervisors out of four, being a gain of three, we elected one Alderman and a Justice of the Peace, a gain of one in each case. The Republicans in this town combined with the Democrats and put up a very hard fight, but the [Progressives] were successful in most instances.

The Illinois situation has been so completely covered in the newspapers that it is not necessary to touch in this letter on the results there.

One of the most significant results of the election was undoubtedly that in the 7th Congressional District of New Jersey, which is a manufacturing district, Paterson being the large City and the center of population in the district. Last year, you will recall, there was a Gubernatorial election in New Jersey. In the Progressive primaries, Mr. Edmund B. Osborne and Mr. Everett Colby contested for the Progressive nomination for Governor. Mr. Osborne ran on a very radical platform, in which he went away beyond what was contained in our 1912 platform. Mr. Colby stood squarely on the 1912 Platform and he was selected by the Progressives of New Jersey by a vote that was very much in excess of Mr. Osborne's. This primary contest led to a split in the Party in the State, because of which we were not very successful in the election last year. The same thing has happened in this 7th Congressional District this year. Mr. Whitehead, the Progressive candidate, belongs to what is known as the Osborne faction of the Progressive Party in New Jersey. He not only went away beyond our Platform of 1912 in his campaign by coming out for such things as government ownership of railroads, telegraphs and telephones, but also he did not stand for the plank in our Platform [page 2] in regard to the Tolls question and sided with President Wilson in his desire and attempt to repeal the Tolls Exemption Clause. We had absolutely no speakers in the District from National Headquarters. In fact, the campaign from the Progressive point of view was not an important one, but the result showed such a small vote for Mr. Whitehead, such an overwhelming vote for the Republican Candidate, such a stunning defeat for the Democratic candidate, as to be an object lesson, it seems to us, on a good many points: first, that our 1912 Platform, which crystallized into one document the thoughts and ideals of the wisest and most independent thinkers of the country, is as advanced as the country calls for and that any attempt, such as was made in New Jersey in 1913 and again this year, to go beyond that Platform is unwise and injudicious; second, that it is all important for our Party to be a united Party on the Platform as on everything else; third, that when we do this we will command the vote as we did in 1912, as we have done in Massachusetts, Michigan, New York and other places; fourth, that the Wilson Administration received in this election in the 7th Congressional District of New Jersey a very severe blow. Prominent Democratic speakers were poured into the District from Washington, many of them declaring in their speeches that the result would be looked upon as an endorsement or otherwise of the Administration. President Wilson himself so regarded the election, as is evident from the following letter which he wrote to the Democratic candidate:

"May I not, as the time for the election approaches, send you this line of warm [endorsement]?

"I hope sincerely that the people of your district will elect you to the House and in this way not only do you honor, but also show their judgment with regard to the present Administration".

While writing on this subject, let me say that our recent State Convention in Maine was a great success, at which over 900 delegates were present, and the spirit was absolutely fine. Mr. Halbert P. Gardner, our National Committeeman from that State, was nominated for Governor, and they are going to the fight just as hard as they know how.

We are just in receipt of a report from Iowa that [at] a conference there yesterday, candidates were announced for every place on the State ticket and that in all but four Congressional Districts of the State, Progressive candidates have been already announced.

May I impress on you once more the great necessity of solidarity of action and of standing on our 1912 Platform? I was told only yesterday that there are already no less than ten instances in which the Democrats have repudiated their Platform pledges, so that it behooves us to be scrupulously careful to respect our Platform and to remember that we referred to it in 1912 as "A Contract with the People". With the distinct split now in evidence in the Democratic Party, with this vote in the 7th [page 3] District in New Jersey, everything points to the importance of our crowding still harder organization work in preparation for next fall's campaign, for it is every day becoming clearer that the Democratic policies are not going to be popular; that the leaders of the Republican Party are the same old leaders with the same old unpopularity; that our 1912 Platform is clearly the one great constructive document in the political world [today]; and that it is our business to go to the fight with might and main to make this clear to the voters in each and every district.

P.S. Since writing the above, my attention has been called to the following, which I extract from an editorial in this morning's New York Times, which newspaper, you will remember, supported Mr. Wilson pretty strongly in the campaign of 1912.

"There is no great probability that the present Democratic House will take warning. It will continue to mess and muddle in its characteristically incompetent way with the anti-trust bills, for which there is not the slightest reason or excuse, and which are one of the cause of the withdrawal of confidence from the Democratic Party, and, of course, defeat in a single district and prospect of defeat in the country next fall cannot possibly put brains and steadiness and principle in the Democratic majority. But the result in the Seventh New Jersey District is a portent". 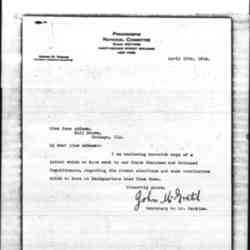 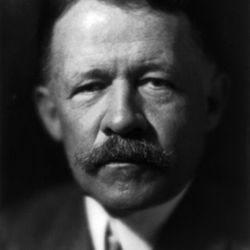 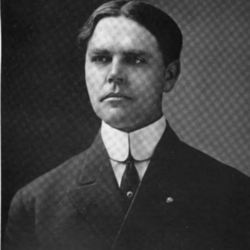 Perkins reports the outcomes of local and state elections, but puts a particular emphasis on the outcome of the 7th district of New Jersey.