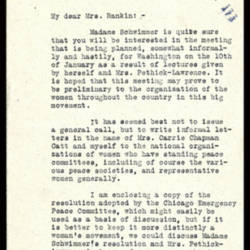 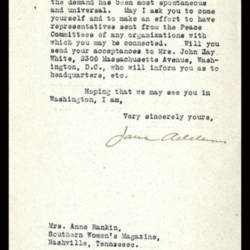 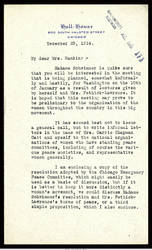 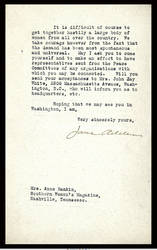 Madame Schwimmer is quite sure that you will be interested in the meeting that is being planned, somewhat informally and hastily, for Washington on the 10th of January as a result of lectures given by herself and Mrs. Pethick-Lawrence. It is hoped that this meeting may prove to be preliminary to the organization of the women throughout the country in this big movement.

It has seemed best not to issue a general call, but to write informal letters in the name of Mrs. Carrie Chapman Catt and myself to the national organizations of women who have standing peace committees, including of course the various peace societies, and representative women generally.

I am enclosing a copy of the resolution adopted by the Chicago Emergency Peace Committee, which might easily be used as a basis of discussion, but if it is better to keep it more distinctly a woman's movement, we could discuss Madame Schwimmer's resolution and Mrs. Pethick-Lawrence's terms of peace, or a third simple proposition, which I also enclose. [page 2]

It is difficult of course to get together hastily a large body of women from all over the country. We take courage however from the fact that the demand has been most spontaneous and universal. May I ask you to come yourself and to make an effort to have representatives sent from the Peace Committees of any organizations with which you may be connected. Will you send your acceptances to Mrs. John Jay White, 2306 Massachusetts Avenue, Washington, D.C., who will inform you as to headquarters, etc.

Hoping that we may see you in Washington, I am, 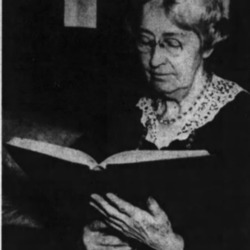 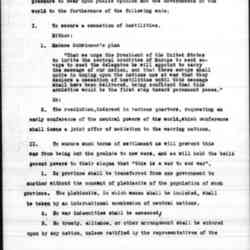 Addams discusses plans for gathering a group of women peace activists to work on a resolution or proposal. (Enclosures not found.)

Courtesy of the Tennessee State Library and Archives.