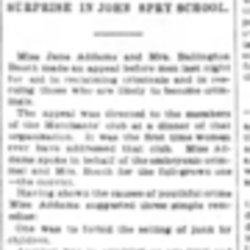 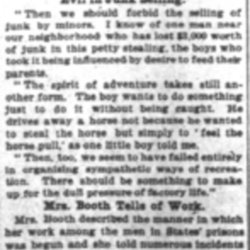 TELL OF WORK IN SLUMS.

WOULD STOP SALE OF JUNK.

Cause of the Older Criminal is Defended by the Wife of the Commander of the Volunteers.

Miss Jane Addams and Mrs. Ballington Booth made an appeal before men last night for aid in reclaiming criminals and in rescuing those who are likely to become criminals.

The appeal was directed to the members of the Merchants' club at a dinner of that organization. It was the first time women ever have addressed that club. Miss Addams spoke in behalf of the embryonic criminal and Mrs. Booth for the full-grown one -- the convict.

One was to forbid the selling of junk by children.

Another was to establish an age limit and make educational qualifications for newsboys.

The third was to provide recreation for men and boys who have been under the high pressures of factory work all day.

As indirectly bearing on the suggestions Miss Addams made for the betterment of the classes most readily led to a criminal life, President Bissell of the club announced that in the forthcoming educational report of the club the work begun by it at the John Spry School, Twenty-fifth street and Southwest boulevard, would be reviewed.

"And it will surprise even members of the club to learn what has been done in that school," [she] said.

Making of a Criminal.

"We have a way of intimating that there is a connection between criminality and foreigners. I have to admit that the Italian colonies near Hull House have furnished their full quota to the State Institutions, but I do not admit it is because of anything they inherit.

"Within eighteen days from the time an Italian family leaves Naples it may find itself established in a tenement house in Chicago, trying to learn a strange tongue and trying to get used to strange associations. Here comes out the curious dependency of the old upon the young. The children 'catch on' rapidly. They learn English rapidly. They are able to get work much more easily than the parents.

"The boy gets the idea that he is responsible for the support of the family. He goes out to sell papers, to pick up junk, or to get whatever work he can. When he brings home money he is praised.

"Now, to such boys there is a temptation to get what is needed at home -- if they can't get it honestly, to get it by stealing junk from one wagon and selling it to another, or breaking into an empty house and cutting out the plumbing.

Honest Heart, Yet a Thief.

"It may be an honest desire to help his family that leads a boy into trouble. It is not right that a boy of 9 or 10 years should feel responsible for the feeding of a family. The best thing the boy has in him is what has led to his undoing.

"Added to this is the cupidity of parents. A father finds his children can earn money even more readily than he can, and he learns to rely upon them. It is a creed -- a code -- among the Italians.

"Then take quite another set of motives which leads boys into wrongdoing. There is the spirit of adventure. Boys with this spirit are found [downtown] selling papers.

"Some age limit should be established for these boys. It is not right for boys of 6 and 7 years to be 'flipping' on and off street cars, day and night, amid all the demoralizing influences of [downtown] Chicago. They see intimately and at first hand all the things from which other children are carefully guarded.

"Then we should forbid the selling of junk by minors. I know of one man near our neighborhood who has lost $3,000 worth of junk in this petty stealing, the boys who took it being influenced by desire to feed their parents.

"The spirit of adventure takes still another form. The boy wants to do something just to do it without being caught. He drives away a horse not because he wanted to steal the horse but simply to 'feel the horse pull,' as one little boy told me.

"Then, too, we seem to have failed entirely in organizing sympathetic ways of recreation. There should be something to make up for the dull pressure of factory life."

Mrs. Booth described the manner in which her work among the men in States' prisons was begun and she told numerous incidents of the way in which it has been received by the men.

"We have 84,000 convicts in this country," she said. "[Someday] they will have their freedom, and what of that day? These men have been told the story of the prodigal son. They are tired of it. They are told that they have got down to the swine and are eating the husks and how do they like it? I sometimes wish I could speak from all the pulpits in this country, and I should preach from the parable of the prodigal son, but it would be of the older brother.

"Many of them believe when they get in prison that when they get out they will lead honest lives. Probably the majority of them want to. They can't. Frequently when they are released they are dogged and railroaded back into prison again." 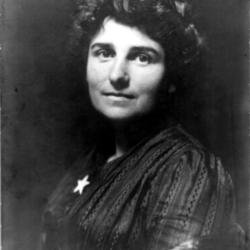