Address to the Traction Commission of the Council, January 4, 1902 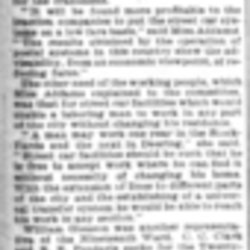 Arguments Made Before the Traction Commission of the Council.

Federation Representatives Object to Any Plan Not for City Ownership.

Laboring men who ride to work in the morning and back in the evening want lower street car fare. This was made plain yesterday to the Council Traction commission.

Speeches were made by representatives of unions and of ward improvement clubs. Miss Jane Addams of Hull House also spoke in behalf of the working people living in the Nineteenth Ward. Representatives of the Federation of Labor urged municipal ownership as a step to reduce fares.

With Miss Addams, as with the men who pay street car fare every day to get to work, the demand was for lower fares, not for direct compensation to the city, in exchange for the franchises.

"It will be found more profitable to the traction companies to put the street car systems on a low fare basis," said Miss Addams. "The results obtained by the operation of postal systems in this country show the advisability, from an economic viewpoint, of reducing fares."

The other need of the working people, which Miss Addams explained to the committee, was that for street car facilities which would enable a laboring man to work in any part of the city without changing his residence.

"A man may work one year in the Stock-Yards and the next in Deering," she said. "Street car facilities should be such that he is free to accept work where he can find it without necessity of changing his home. With the extension of lines to different parts of the city and the establishing of a universal transfer system he would be able to reach his work in any section."

William Gleason was another representative of the Nineteenth Ward. C. C. Clark and R. E. Pendaris spoke for the Twenty-seventh Ward.

Aside from the ward representatives, the committee heard two members of the legislative committee of the Federation of Labor, George Thompson and James Bowman. Mr. Thompson read the report of the committee, which stood squarely by the municipal ownership idea.

"After what the street car companies have done in the past," he said, "it would be intolerable weakness on the part of the city to grant them any concessions or consideration. Until the Legislature passes an act for municipal ownership we should not talk of extension."

It was announced in this connection that the federation is circulating petitions for the submission of municipal ownership propositions to the people.

Of compensation the report said:

"Compensation should go to the man on the car in the shape of reduced fare. In this manner alone can justice be done. It is unjust, unnecessary, and unfair to tax working people, thousands of whom are boys and girls working for $3 a week for [downtown] corporations and stores, when they have already paid more than their share of taxes in the shape of rents, etc.

"A three-cent fare would net a high rate of interest upon actual capital invested. The poor man would welcome this boon of cheap fares and the aggregate earnings of the railways would be increased by the increased traffic."

The labor representatives declared that nothing would be lost by allowing the franchises to expire without extending them. It would be better, they declared, to suffer from inadequate service for a few years longer than to burden the city with a twenty-year franchise without the hope of municipal ownership.

Other speakers affirmed that municipal ownership could be secured by the insertion of proper provisions in the franchise ordinances for the taking over of the property by the city at any specified time when the municipality should be able.

School Trustee Thomas Gallagher was another speaker and Raymond [Robins] for the Seventeenth Ward Community club presented a number of resolutions advocating low fares and the protection of the interests of the railway [employees]. 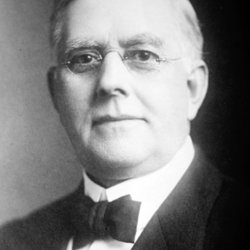 Addams speaks to the Traction Commission, representing the working people living in the 19th Ward and seeking a reduction of public transportation fares.