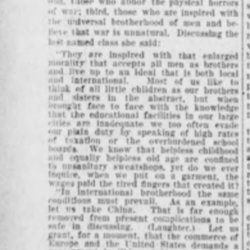 Miss Jane Addams, one of the founders of Settlement work in the United States and now in charge of the Hull Settlement, in Chicago, delivered a lecture on "New Ideals of Peace" before the Ethical Culture Society in the New Century Hall, 124 South Twelfth street, yesterday morning.

Miss Addams divided the opponents of war into three classes: First, those who object to the economic losses involved; second, those who abhor the physical horrors of war; third, those who are inspired with the universal brotherhood of men and believe that war is unnatural. Discussing the last named class she said:

"They are inspired with that enlarged morality that accepts all men as brothers and live up to an ideal that is both local and international. Most of us like to think of all little children as our brothers and sisters in the abstract, but when brought face to face with the knowledge that the educational facilities in our large cities are inadequate we too often evade our plain duty by speaking of high rates of taxation or the overburdened school boards. We know that helpless childhood and equally helpless old age are confined to unsanitary sweatshops, yet do we ever inquire, when we put on a garment, the wages paid the tired fingers that created it?

"In international brotherhood the same conditions must prevail. As an example, let us take China. That is far enough removed from present complications to be safe in discussing. (Laughter.) Let us grant, for a moment, that the commerce of Europe and the United States demands a government in China stable enough to see that commercial contracts can be carried out and that this government must be planned and executed by foreigners. Now, who shall say what race has developed a class of diplomats noble enough to see that when these ports are opened in the sacred name of commerce that the natives of China shall be protected against the various tricks of trade that we have in our midst? Who shall tell a native to consider when he is being imposed upon by a trickster, or when he is buying an article that was put together by a suffering human being in another clime? Not the military, surely, for soldiers always learn, as did the Roman legions, that it is easier to subdue other races and carry away plunder than to create wealth. It is only by learning to embrace all men as brothers that one people can do justice to another."

Addams addresses the Ethical Culture Society about those who oppose war, specifically those who believe that war is unnatural.