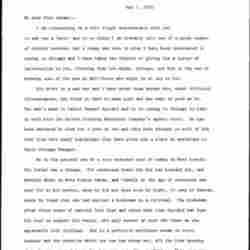 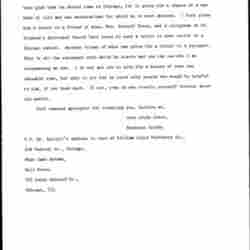 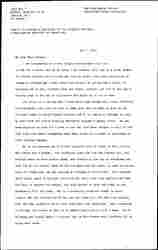 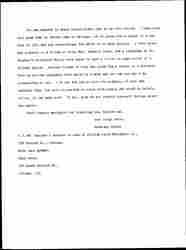 I am trespassing on a very slight acquaintance with you to ask you a favor: and by doing so I am probably only one of a great number of similar persons; but a young man here in whom I have been interested is coming to Chicago and I have taken the liberty of giving him a letter of introduction to you, thinking that you might, perhaps, put him in the way of knowing some of the men at Hull-House who might be of use to him.

His story is a sad one and I have never seen anyone who, under difficult circumstances, has tried so hard to make good and has made so good as he. The man's name is Daniel Howard Speidel and he is coming to Chicago to take up work with the United Printing Machinery Company's agency there. He has been employed by them for a year or two and they have thought so well of him that from very small beginnings they have given him a place as assistant to their Chicago Manager.

He is the natural son of a very wretched sort of woman in Nova Scotia. His father was a German. For seventeen years the boy was boarded out, and knocked about on Nova Scotia farms, and finally at the age of seventeen was sent for by his mother, whom he did not know even by sight, to come to Boston, where he found that she had married a brakeman on a railroad. The brakeman after three years of married life died and since that time Speidel had done his best to support his mother, who only worked at such odd times as she apparently felt inclined. She is a perfectly worthless woman in every respect and the devotion which her son has shown her, all the time knowing what she was, seemed to me to show some very fine qualities. This promotion to Chicago has broken up what it is almost ludicrous to call a home. He is allowing her enough money to support her in Nova Scotia and I believe she is going back there. [page 2]

The man himself is about twenty-eight, but he is very boyish. I have been very glad that he should come to Chicago, for it gives him a chance of a new kind of life and new associations for which he is most anxious. I have given him a letter to a friend of mine, Mrs. Russell Tyson, and a clergyman at St. Stephen's Episcopal Church here hopes to send a letter to some rector of a Chicago Parish. Another friend of mine has given him a letter to a designer. This is all the equipment with which he starts and you can see why I am trespassing on you. I do not ask you to give him a minute of your own valuable time, but only to put him in touch with people who would be helpful to him, if you know such. If not, pray do not trouble yourself further about the matter.

With renewed apologies for troubling you, believe me, 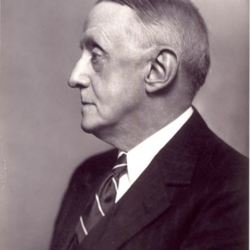 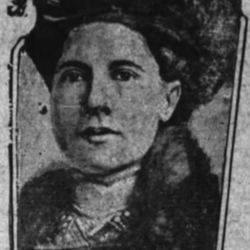 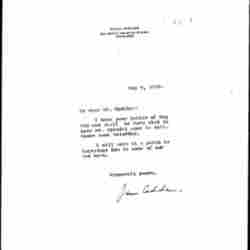 Updike asks Addams to assist a young man in Chicago who has had a difficult life and needs some guidance.

The Huntington Library was unable to provide an image of the original document.