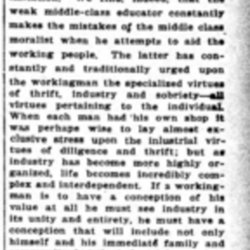 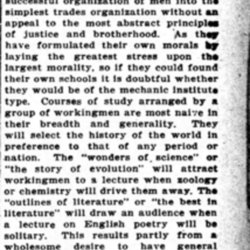 Workingmen Form Their Own Moral Code and Inspire Each Other.

Manufacturers as a whole, however when they attempt educational institutions in connection with their factories, are prone to follow conventional lines and to exhibit the weakness of imitation. We find, indeed, that the weak middle-class educator constantly makes the mistakes of the middle class moralist when he attempts to aid the working people. The latter has contantly and traditionally urged upon the workingman the specialized virtues of thrift, industry and sobriety--all virtues pertaining to the individual. When each man had his own shop it was perhaps wise to lay almost exclusive stress upon the industrial virtues of dilligence and thrift; but as industry has become more highly organized, life becomes incredibly complex and interdependent. If a workingman is to have a conception of his value at all he must see industry in its unity and entirety, he must have a conception that will include not only himself and his immediate family and community, but the industrial organization as a whole. It is doubtless true that dexterity of hand becomes less and less imperative as the invention of machinery and subdivision of labor proceed; but it becomes all the more necessary, if the workman is to save his life at all, that he should get a sense of his individual relation to the system. Feeding a machine with a material of which he has no knowledge, producing a product totally unrelated to the rest of his life, without in the least knowing what becomes of it or its connection with the community, is, of course, unquestionably deadening to his intellectual and moral life. To make the moral connection it would be necessary to give him a social consciousness of the value of his work, and at least a sense of participation and a certain joy in its ultimate use; to make the intellectual connection it would be essential to create in him some historic conception of the development of industry and the relation of his individual work to it. [page 2]

Workingmen themselves have made attempts in both directions, which it would be well for moralists and educators to study. It is a striking fact that when workingmen formulate their own moral code and try to inspire and encourage each other, it is always a large and general doctine which they preach. They were the first class of men to organize an international association, and the constant talk at modern labor meetings is of solidarity and the identify of the interests of workingmen the world over. It is difficult to secure a successful organization of men into the simplest trades organization without an appeal to the most abstract principles of justice and brotherhood. As they have formulated their own morals by laying the greatest stress upon the largest morality, so if they could found their own schools it is doubtful whether they would be of the mechanic institute type. Courses of study arranged by a group of workingmen are most naive in their breadth and generality. They will select the history of the world in preference to that of any period or nation. The "wonders of science" or "the story of evolution" will attract workingmen to a lecture when zoology or chemistry will drive them away. The "outlines of literature" or "the best in literature" will draw an audience when a lecture on English poetry will be solitary. This results partly from a wholesome desire to have general knowledge before special knowledge, and is partly a rebound from the specialization of labor to which the workingman is subjected. When he is free from work and can direct his own mind he tends to roam, to dwell upon large themes. Much the same tendency is found in programs of study arranged by women's clubs in country places. The untrained mind, wearied with meaningless detail, when it gets an opportunity to make its demand heard, asks for general philosophy and background. -- Jane Addams.

Addams scores a plan by manufacturers to form an educational institution.