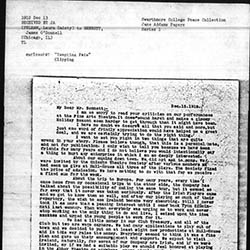 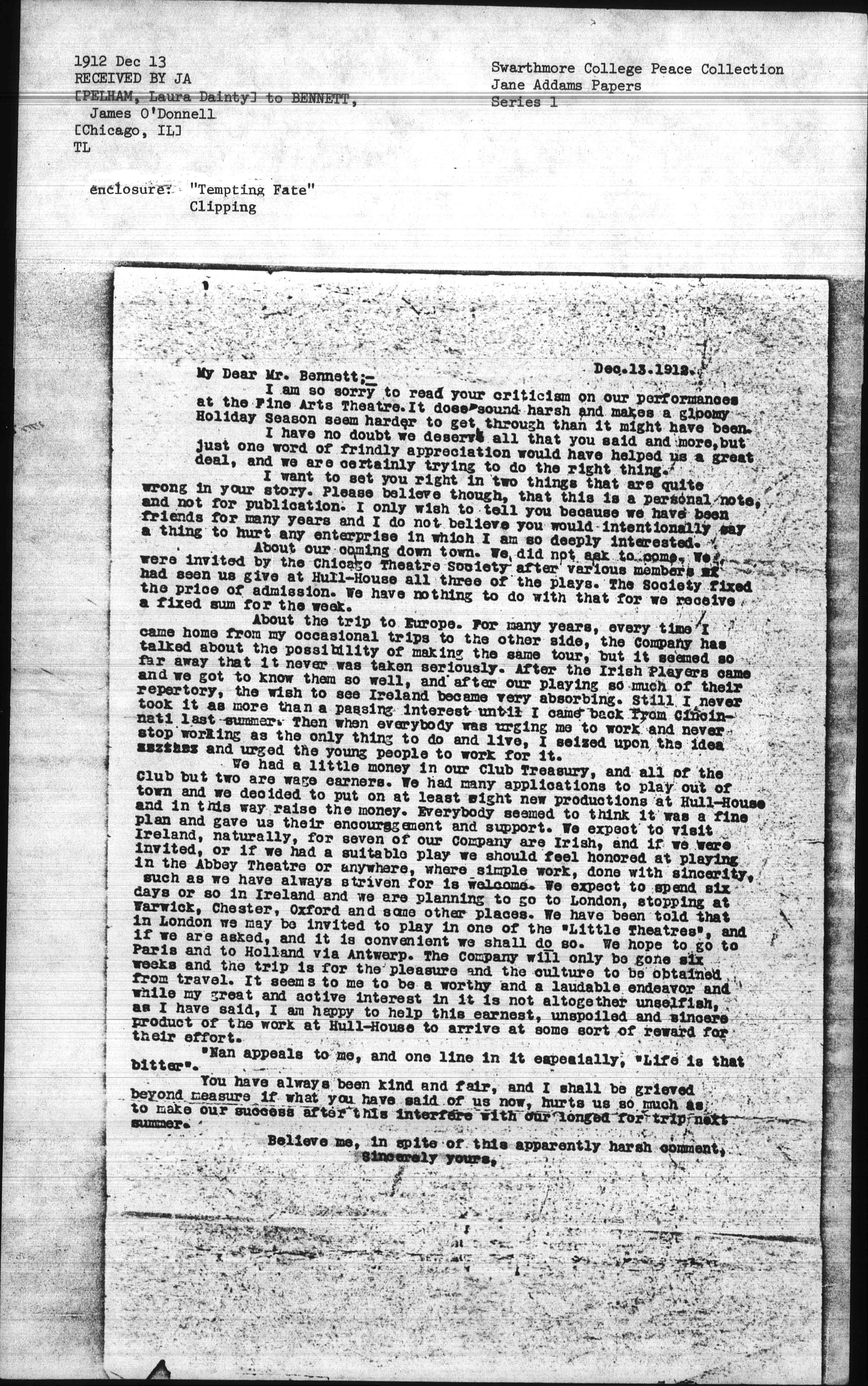 I am so sorry to read your criticisms on our performances at the Fine Arts Theatre. It does sound harsh and makes a gloomy Holiday Season seem harder to get through than it might have been.

I have no doubt we deserve all that you said and more, but just one word of friendly appreciation would have helped us a great deal, and we are certainly trying to do the right thing.

I want to set you right in two things that are quite wrong in your story. Please believe though, that this is a personal note, and not for publication. I only wish to tell you because we have been friends for many years and I do not believe you would intentionally say a thing to hurt any enterprise in which I am so deeply interested.

About our coming down town. We did not ask to come. We were invited by the Chicago [Theater] Society after various members of had seen us give at Hull-House all three of the plays. The Society fixed the price of admission. We have nothing to do with that for we receive a fixed sum for the week.

About the trip to Europe. For many years, every time I came home from my occasional trips to the other side, the company has talked about the possibility of making the same tour, but it seemed so far away that it never was taken seriously. After the Irish Players came and we got to know them so well, and after our playing so much of their repertory, the wish to see Ireland became very absorbing. Still I never took it as more than a passing interest until I came back from Cincinnati last summer. Then when everybody was urging me to work and never stop working as the only thing to do and live, I seized upon the idea and urged the young people to work for it.

We had a little money in our Club Treasury, and all of the Club but two are wage earners. We had many applications to play out of town and we decided to put on at least eight new productions at Hull-House and in this way raise the money. Everybody seemed to think it was a fine plan and gave us their encouragement and support. We expect to visit Ireland, naturally, for seven of our Company are Irish, and if we were invited, or if we had a suitable play we should feel honored at playing in the Abbey Theatre or anywhere, where simple work, done with sincerity, such as we have always striven for is welcome. We expect to spend six days or so in Ireland and we are planning to go to London, stopping at Warwick, Chester, Oxford, and some other places. We have been told that in London we may be invited to play in one of the "Little [Theaters]", and if we are asked, and it is convenient we shall do so. We hope to go to Paris and to Holland via Antwerp. The Company will only be gone six weeks and the trip is for the pleasure and the culture to be obtained from travel. It seems to me to be a worthy and a laudable endeavor and while my great and active interest in it is not altogether unselfish, as I have said, I am happy to help this earnest, unspoiled and sincere product of the work at Hull-House to arrive at some sort of reward for their effort.

"Nan appeals to me, and one line in it especially, "Life is that bitter".

You have always been kind and fair, and I shall be grieved beyond measure if what you have said of us now, hurts us so much as to make our success after this interfere with our longed for trip next summer.

Believe me, in spite of this apparently harsh comment, 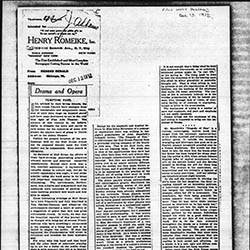 Pelham responds to Bennett's harsh critique of the Hull-House Players.