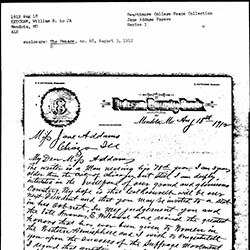 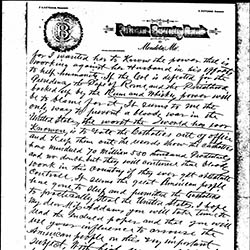 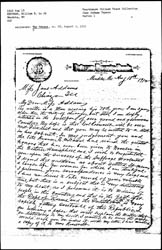 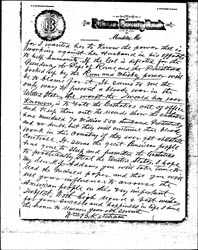 The writer is a Man nearing his 78th year. I am 3 years older than the city of Chicago, but still I am deeply interested in the [willpower?] of our grand and glorious country. My hope is that Col Roosevelt will be our next President and thay you may be invited to a seat in his cabinet. In my judgement you and the late Frances E. Willard have [illegible] the greatest honors that has ever been given to Women in the Western Hemisphere and I wish to congratulate you upon the success of the Suffrage Movement I regard that question as about settled. It means a larger life for women for which I am thankful. I presume your correspondences is very large and I have no desire to take much of your valuable time, but there is a subject that is very distressing to my heart, as I presume it is to millions of people in this country, and that is, the fact that the Pope of Rome and the Priesthood <in the US> is very rapidly getting [control] of this Republic. I am [enclosing] a paper that will explain the matter that <is> so distressing to my heart. I wanted to be sure the paper would reach you so [enclose] it with my letter. I have mailed a copy of it to Mrs Roosevelt [page 2] for I wanted her to know the power that is working against her Husband in his efforts to help humanity. If the Col is defeated for the Presidency the Pope of Rome, and the Priesthood backed up by the Rum and Whiskey power will be to blame for it. It seems to me the only way to prevent a bloody war in the United States, the worst the world has ever known, is to vote the Catholics out of office and keep them out. The records show the catholics have murdered 70 million 550 thousand Protestants and no doubt but they will continue [their] bloody work in this country if they ever get absolute control. It seems the great American people have gone to sleep and permitted the Catholics to practically steal the United States. I hope my dear [Miss] Addams you will take time to read the enclosed paper and that you will use your influence to [arouse?] the American people on this very important subject. With high regard & best wishes for your success and happiness in life I have the honor to remain your [obt] servant 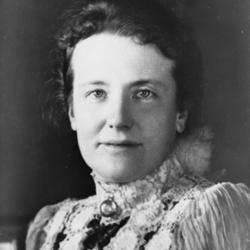 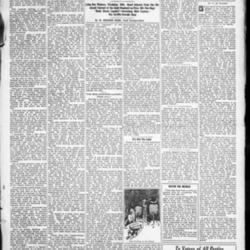 The Torture Tunnel -- The Underground Way -- From God's Altar to Hell's Sweatshops, August 3, 1912

Ketcham writes to Addams about his support for Theodore Roosevelt and cautions about the danger of the Catholic Church against him.