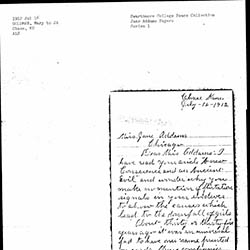 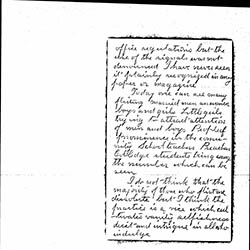 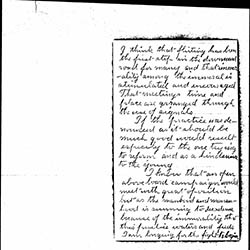 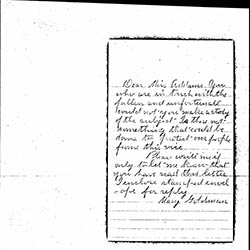 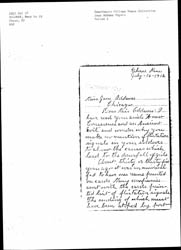 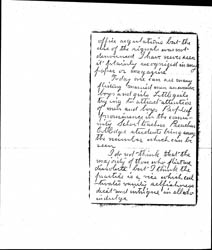 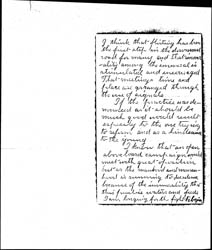 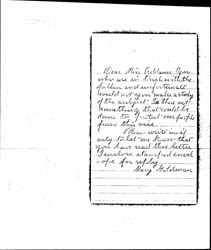 Dear Miss Addams: I have read your [article] "A new Conscience and an Ancient Evil" and wonder why you make no mention of flirtation signals in your [endeavor] to show the causes which lead to the downfall of girls.

About thirty or thirty-five years ago it was [a] universal fad to have one's name printed on cards. Many companies sent with the cards printed list of flirtation signals. The sending of which must have been [stopped] by post-office [page 2] regulations but the use of the signals was not denounced. I have never seen it plainly recognized in any paper or magazine.

Today one can see many flirting married men [and] women boys and girls. Little girls trying to attract attention of men and boys. People of prominence in the community School teachers, Preachers, [College] students being among the number which can be seen.

I do not think that the majority of those who flirt are dissolute but I think the practice is a vice which cultivates vanity, selfishness, [deceit] and intrigue in all who indulge. [page 3]

I think that flirting has been the first step in the downward road for many and that immorality among the immoral is stimulated and encouraged. That meetings time and place are arranged through the use of signals.

If the practice was denounced as it should be much good would result especially to the one trying to reform and as a hindrance to the young.

I know that an open above board campaign would meet with great [opposition] but as the manhood and womanhood is running to decadence because of the immortality that this practice waters and feeds I am longing for the fight to begin. [page 4]

Dear Miss Addams you who are in touch with the fallen and unfortunate could not you make a study of the subject? Is there not something that could be done to protect our people from this vice?

Please write me if only to let me know that you have read this letter. I enclose stamped envelope for reply. 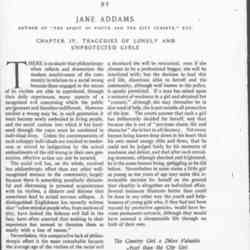 Upon reading one of her articles in McClure's Magazine, Goldman writes Addams about the evils of flirtation and asks her to look into ways of preventing it.