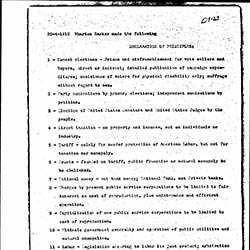 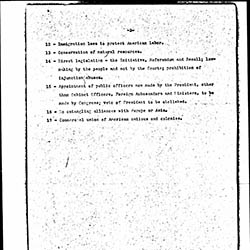 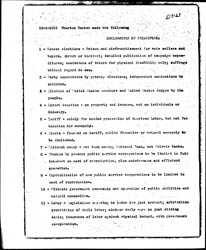 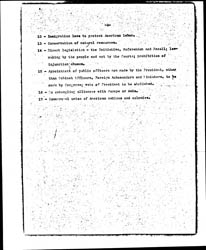 1 -- Honest elections -- Prison and disfranchisement for vote sellers and buyers, direct or indirect; detailed publication of campaign expenditures; assistance of voters for physical disability only; suffrage without regard to sex.

4 -- Direct taxation -- on property and incomes, not on individuals or industry.

5 -- Tariff -- solely for needed protection of American Labor, but not for taxation nor monopoly.

6 -- Trusts -- founded on tariff, public franchise or natural monopoly to be abolished.

8 -- Charges by present public service corporations to be limited to fair interest on cost of reproduction, plus maintenance and efficient operation.

9 -- Capitalization of new public service corporations to be limited to cost of reproduction.

14 -- Direct legislation -- the Initiative, Referendum and Recall; lawmaking by the people and not by the Courts; prohibition of injunction abuses.

15 -- Appointment of public officers now made by the President, other than Cabinet Officers, Foreign Ambassadors and Ministers, to be made by Congress, veto of President to be abolished.

16 -- No entangling alliances with Europe or Asia. 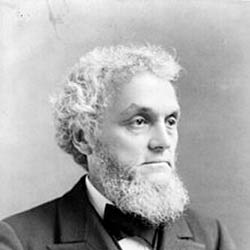 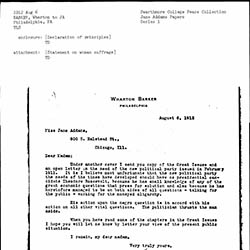 This "Declaration of Principles" enumerates the ideals of the Progressive Party.