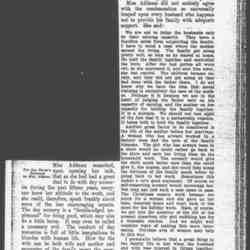 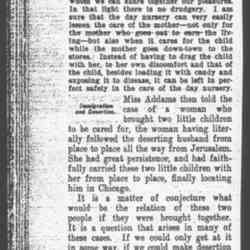 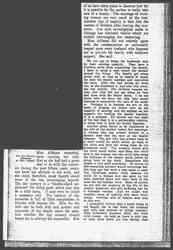 Miss Addams remarked, upon opening her talk, that as she had had a great deal to do with day nurseries during the past fifteen years, everyone knew her attitude to the work, and she could, therefore, speak frankly about some of the less encouraging aspects. The day nursery is a "double-edged implement" for doing good, which may also do a little harm. It may even be called a necessary evil. The conduct of day nurseries is full of little temptations to blunder with human life. How far the wife can be both wife and mother and supporter of the family raises the question whether the day nursery should tempt her to attempt the impossible. Few of us have taken pains to discover how far it is possible for the mother to really take care of a family. The earnings of working women are very small at the best. Another line of inquiry is that into the careers of children after leaving day nurseries. One such investigation made in Chicago has disclosed results which are neither encouraging nor reassuring.

Miss Addams did not entirely agree with the condemnation so universally heaped upon every husband who happens not to provide his family with adequate support. She said:

We are apt to judge the husbands only by their earning capacity. They have a function aside from supporting the family. I have in mind a case where the mother earned the living. The family got along pretty well, so long as he stayed at home. He held the family together and controlled the boys. After she had gotten all worn out, as she expressed it, and sent him away, she lost control. The children became unruly, and they did not get along as they had done with the father there. I do not know why we have the idea that moral training is exclusively the care of the mother. Perhaps it is because we are in the habit of judging the father only on his capacity of earning, and the mother on her capacity for holding the family together. It is a mistake. We should not lose sight of the fact that it is a partnership relation. It takes both to hold the family together.

Another great factor to be considered is the life of the mother before her marriage. A woman who has always worked in a factory does find the care of the family irksome. The girl who has always been in a store would no doubt rather go back to the store and earn her living than do the household work. The nursery would give the child much better care than she could give it, she argues, and she could help along the fortunes of the family much better by going back to her work. Sometimes this makes a very good argument. Of course no self-respecting nursery would encourage her. Not long ago just such a case came to pass. The Christmas season work became too much for a woman and she gave up her babe, deserted home and went back to the store for the holiday work. Here, of course, we get into the question of the life of the present American city girl unfitting her for a domestic routine. And we might well consider ways of making this more interesting. Old-time arts of women may help in this way.

I personally believe that a great thing in the family life is lost when the husband and wife lose interest in things together. This invariably happens when the third child comes. As long as there is only one, or even after there are two babies, they [page 2] can all go to the theatres, shows and places of amusement. When it comes to taking three it becomes a problem. There must be an extra seat at the theatre and the family grows more of a burden. If there could be some way devised so that people could still have their pleasures together, even when there is a large family, it would be of great help. Some kind of a neighborhood arrangement that can supply this need would do good. The person whom we do not care to be parted from is the one with whom we can share together our pleasures. In that light there is no drudgery. I am sure that the day nursery can very easily lessen the care of the mother – not only for the mother who goes out to earn the living – but also when it cares for the child while the mother goes down-town to the stores. Instead of having to drag the child with her, to her own discomfort and that of the child, besides loading it with candy and exposing it to disease, it can be left in perfect safety in the care of the day nursery.

It is a matter of conjecture what would be the relation of these two people if they were brought together. It is a question that arises in many of these cases. If we could only get at it in some way, if we could made desertion less possible because we could get at the cause of desertion, what it is that makes them fly apart in this way! There must be social forces and social devices which might be instituted to prevent separation.

If we are really to accomplish anything, we must get at these underlying social causes, and discover counteracting social forces and devices which may be made use of to prevent these separations.

An extract of Addams' discussion of day nurseries, and their impact on poor families.