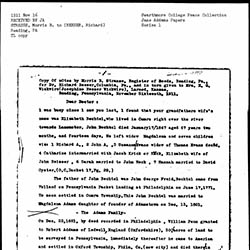 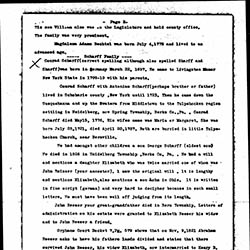 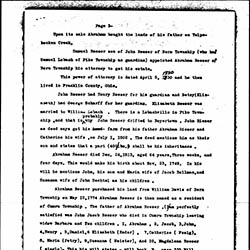 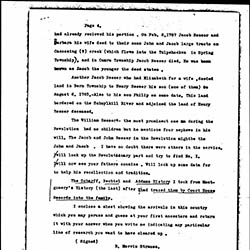 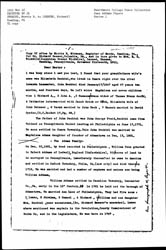 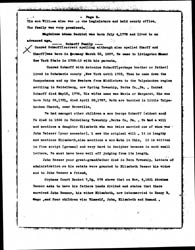 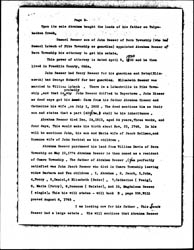 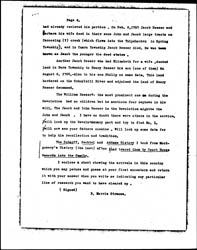 I was busy since I saw you last. I found that your grandfather's wife's name was Elizabeth Bechtel, who lived in Cumru right over the river towards Lancaster. John Bechtel died January 17/1847 aged 67 years two months, and fourteen days. He left widow Magdalena and seven children viz: 1 Richard A., 2 John A., 3 Susanna Evans widow of Thomas Evans [deceased], 4 Catharine intermarried with Jacob Krick or [Kuck], Elizabeth wife of John Reisser, 6 Sarah married to John Heck, 7 Hannah married to David Oyster. (O.C. Docket 17, Pg. 29.)

The father of John Bechtel was John George Freid. Bechtel came from Holland on Pennsylvania Packet landing at Philadelphia on June 17, 1771. He soon settled in Cumru Township. This John Bechtel was married to Magdalena Adams daughter of founder of Adamstown on Dec. 13, 1801.

On Dec. 22, 1681, by deed recorded in Philadelphia, William Penn granted to Robert Addams of Ledwell, England (Oxfordshire), 500 acres of land to be surveyed in Pennsylvania. Immediately thereafter he came to America and settled on Oxford Township, Phila. Co. (now city) and died there in 1719. He was married and had a number of nephews and nieces one being William Addams.

William Addams settled in Cacalico Township, Lancaster Co., Pa, early in the 18" Century. In 1761 he laid out the borough of Adamstown. He married Ann Lane of Philadelphia. They had Five sons: 1 Isaac, 2 Abraham, 3 Samuel, 4 Richard, 5 William and one daughter Mrs. Bechtel, your ancestress. (Dr. Richard Reeser's ancestor). Isaac above mentioned was captain in the Revolution, County Commissioner of Berks Co. and in the Legislature. He was born in 1747. [page 2]

His son William also was in the Legislature and held county office. The family was very prominent.

Magdalena Adams Bechtel was born July 4, 1778 and lived to an advanced age.

Conrad Scharff (correct spelling although also spelled Sharff and Sharff) was born in Germany March 22, 1697. He came to Livingston Manor New York State in 1709-10 with his parents.

Conrad Scharff with Antonius Scharff (perhaps brother or father) lived in Schoharie County, New York until 1723. Then he came down the Susquehanna and up the Swatara from Middletown to the Tulpehocken region settling in Heidelberg, now Spring Township, Berks Co., Pa., Conrad Scharff died May 15, 1776. His wife's name was Maria or Margaret. She was born July 28, 1721, died April 20, 1787. Both are buried in little Tulpehocken Church, near Bernville.

He had amongst other children a son George Scharff (eldest son) He died in 1826 in Heidelberg Township, Berks Co. Pa., He had a will and mentions a daughter Elizabeth who was twice married one of whom was John Reisser (your ancestor). I saw the original will. It is lengthy and mentions Elizabeth, also mentions a son John in Ohio. It is written in fine script (German) and very hard to decipher because in such small letters. He must have been well off judging from its length.

John Reeser your great-grandfather died in Bern Township. Letters of administration on his estate were granted to Elizabeth Reeser his widow and to John Reeser a friend.

Orphans Court Docket 7, Pg. 579 shows that on Nov. 9, 1821 Abraham Reeser asks to have his father's lands divided and states that there survived John Reeser, his widow Elizabeth, now intermarried to Henry B. Sage, and four children viz: Himself, John, Elizabeth and Samuel. [page 3]

Upon its sale Abraham bought the lands of his father on Tulpehocken Creek,

This power of attorney is dated April 5, <1830> and he then lived in Franklin County, Ohio.

John Reeser had Henry Reeser for his guardian and Betsy (Elizabeth) had George Scharff for her guardian. Elizabeth Reeser was married to William Lobach. There is a Lobachville in Pike Township, and that is <probably> why John Reeser drifted to Boyertown. John Rieser as deed says got his land farm from his father Abraham Rieser and Catherine his wife, on July 1, 1802. The deed mentions him as their son and states that a part (400 lbs.) shall be his inheritance.

Abraham Reeser died Dec. 24, 1813, aged 64 years, three weeks, and four days. This would make his birth about Nov. 23, 1749. In his will he mentions John, his son and Maria wife of Jacob Bollman, and Susanna wife of John Bechtel as his children.

Abraham Reeser purchased his land from William Davis of Bern Township on May 12, 1774 Abraham Reeser is then named as a resident of Cumru Township. The father of Abraham Reeser, (I am perfectly satisfied was John Jacob Reeser who died in Cumru Township leaving widow Barbara and Ten children. 1. Abraham, 2. Jacob, 3. John, 4. Henry, 5. Daniel, 6. Elizabeth (Reder), 7. Catherine (Fesig), 8. Maria (Petry), 9. Susanna (Heister), and 10. Magdalena Reeser (single). This his will states -- will book B, page 335. Will proved August 8, 1793.

I am looking now for his father. This Jacob Reeser had a large estate. His will mentions that Abraham Reeser [page 4] had already received his portion. On Feb. 8, 1787 Jacob Reeser and Barbara his wife deed to their sons John and Jacob large tracts on Cacoosing (?) Creek (which flows into the Tulpehocken in Spring Township), and in Cumru Township Jacob Reeser died. He was been known as Jacob the younger the deed states.

Another Jacob Reeser who had Elizabeth for a wife, deeded land in Bern Township to Henry Reeser his son (one of them) on August 6, 1765, -- Also to his son Philip on same date. This land bordered on the Schuylkill River and adjoined the land of Henry Reeser deceased.

The William Reeser -- the most prominent one [illegible] during the Revolution had no children but he mentions four nephews in his will. The Jacob and John Reeser in the Revolution might be the John and Jacob. I have no doubt there were others in the service. I will look up the Revolutionary part and try to find No. 1. I will now see your father's cousins. Will look up some data for to help his recollection and tradition.

The Scharff, Bechtel and Addams History I took from Montgomery's History (the last) after I had traced them by Court House Records into the family.

I enclose a sheet showing the arrivals in this country which you may peruse and guess at your first ancestors and return it with your answer when you write me indicating any particular line of research you want to have cleared up. 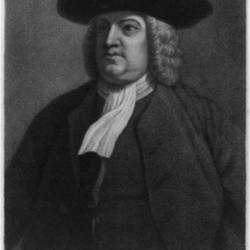 Strauss outlines the genealogy of the Reeser, Bechtel, Addams, and Scharff families for Reeser. Addams received a copy of the letter.

Only the names under the Addams' Family section have been indexed.