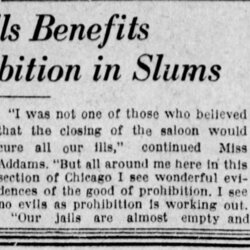 CHICAGO, March 12 -- "Prohibition has more than made good on the most sensational promises of its advocates."

The speaker was Jane Addams, famous as the head of Hull House, Chicago's noted settlement house in the slum district.

"I was not one of those who believed that the closing of the saloon would cure all our ills," continued Miss Addams. "But all around me here in this section of Chicago I see wonderful evidences of the good of prohibition. I see no evils as prohibition is working out.

"Our jails are almost empty and Bridewell is two-thirds empty. We know through the juvenile department that the cases of child neglect due to the drinking of one or both parents have fallen off rapidly, crime has decreased and the charity workers find demands for support for the dependents of drunkards decreasing."

Addams argues that the impact of Prohibition in the slums has been positive thus far.