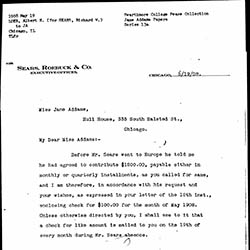 Albert Henry Loeb was a lawyer and a businessman. For some time, he worked as the executive of Sears, Roebuck and Co. Loeb was well known in Chicago, as a local attorney. Towards the end of his life, Loeb was in the news frequently, as his son Richard was a convicted murderer. Loeb died in 1924.