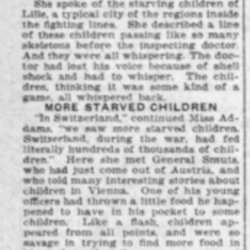 JANE ADDAMS IN TALE OF HUNGER

More food is needed immediately to save the starving children of war-ridden Europe, declared Miss Jane Addams of Hull House, Chicago, in a talk before the Badger Club last night.

She spoke of the starving children of Lille, a typical city of the regions inside the fighting lines. She described a line of these children passing like so many skeletons before the inspecting doctor. And they were all whispering. The doctor had lost his voice because of shell shock and had to whisper. The children, thinking it was some kind of a game, all whispered back.

“In Switzerland,” continued Miss Addams, “we saw more starved children. Switzerland, during the war, had fed literally hundreds of thousands of children.” Here she met General Smuts, who had just come out of Austria, and who told many interesting stories about children in Vienna. One of his young officers had thrown a little food he happened to have in his pocket to some children. Like a flash, children appeared from all points, and were so savage in trying to find more food in his pockets that the young man spent a week in the hospital.

“Armenia is one of the most wretched places of all,” said Miss Addams, and also described the serious conditions in Germany, where the tuberculosis rate is high, especially among young mothers.

“At this moment,” she continued, “no one city in Europe is worse off than Vienna, where it is rumored that the older people have entered into a suicide pact, so there will be food enough to save the younger people."

Hoover is giving two meals a day to about 5,000,000 children and needs more funds, Contributions should be sent to the European Children’s Fund, 115 Broadway, New York City. 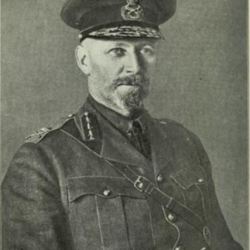 Addams discusses efforts to save starving children in Europe.