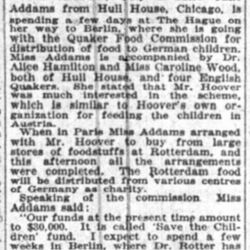 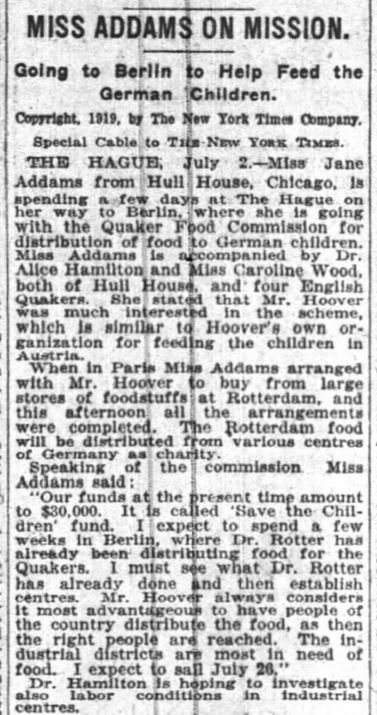 Going to Berlin to Help Feed the German Children.

THE HAGUE, July 2. -- Miss Jane Addams from Hull House, Chicago, is spending a few days at The Hague on her way to Berlin, where she is going with the Quaker Food Commission for distribution of food to German children. Miss Addams is accompanied by Dr. Alice Hamilton and Miss [Carolena] Wood, both of Hull House, and four English Quakers. She stated that Mr. Hoover was much interested in the scheme, which is similar to Hoover's own organization for feeding the children in Austria.

When in Paris Miss Addams arranged with Mr. Hoover to buy from large stores of foodstuffs at Rotterdam, and this afternoon all the arrangements were completed. The Rotterdam food will be distributed from various [centers] of Germany as charity.

"Our funds at the present time amount to $30,000. It is called the 'Save the Children' fund. I expect to spend a few weeks in Berlin, where Dr. [Rotten] has already been distributing food for the Quakers. I must see what Dr. [Rotten] has already done and then establish [centers]. Mr. Hoover always considers it most advantageous to have people of the country distribute the food, as then the right people are reached. The industrial districts are most in need of food. I expect to sail July 26."

Addams discusses her plans to distribute food to German children.