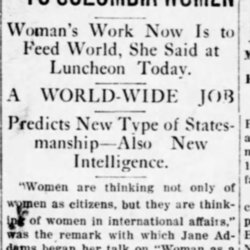 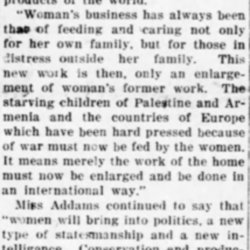 "Women are thinking not only of women as citizens, but they are thinking of women in international affairs," was the remark with which Janes Addams began her talk on "Woman as a Citizen" at the luncheon which the club women of Columbia gave in her honor at the Christian Church today.

"Woman's business has always been that of feeding and caring not only for her own family, but for those in distress outside her family. This new work is then, only an enlargement of woman's former work. The starving children of Palestine and Armenia and the countries of Europe which have been hard pressed because of war must now be fed by the women. It means merely the work of the home must now be enlarged and be done in an international way."

Miss Addams continued to say that "women will bring into politics, a new type of statesmanship and a new intelligence. Conservation and production have brought women into internationalism in a sweet, natural way."

Miss Addams gave an illustration of the manner in which the women of England have earned their right to citizenship. "They have taken up arduous tasks and have entered into the work of making good," said Miss Addams, "and it may be that the women of America will have to do the same thing."

Addams speaks to club women on their responsibilities as citizens to become involved in international affairs.